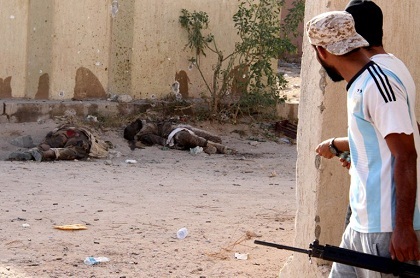 The head of Libya's unity government on Tuesday urged Libyans to rally behind forces battling to retake the city of Sirte from the Islamic State group.

Prime minister-designate Fayez al-Sarraj said advances by pro-government fighters in the jihadist group's North African stronghold should be a model for "a national initiative to fight terrorism."

"We bless the victories of our sons on the front lines... in the fight to liberate Sirte and cleanse it" of IS, he said in a televised statement released on the Facebook page of the Government of National Accord (GNA).

Forces loyal to the U.N.-backed GNA have been fighting since mid-May to oust IS from Sirte, 450 kilometers (280 miles) east of the capital Tripoli.

A parallel force based in eastern Libya, including local militias and units of the national army loyal to a controversial general, Khalifa Haftar, is not taking part in the operation.

Pro-government troops, a mix of militias and army units, have taken control of Sirte's port and airport.

But their advance slowed at the end of last week as they reached central and northern parts of the city where IS fighters are holed up in residential areas.

Pro-government forces announced on Monday that they had seized an IS arms depot, and released a photo showing a room full of ammunition.

They also said that the air force had launched six air strikes against IS positions the city.

The forces fighting IS in Sirte include armed groups from western cities including Misrata, 190 kilometers (120 miles) to the northwest.

The Misratan forces are among the best-armed militias in the country and have several MiG fighter jets and attack helicopters.

These militias were set up during the 2011 uprising against former strongman Moammar Gadhafi.

Following the downfall of the regime and Gadhafi's death they kept their weapons and became major military players in the country.

A militia set up to guard the country's main oil installations has also been advancing on IS from the east. Last week it took control of several villages and towns including Harawa, 70 kilometers (40 miles) east of Sirte.