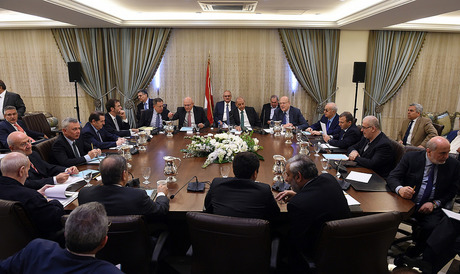 Speaker Nabih Berri warned the national dialogue parties on Tuesday against even “thinking” of holding the next parliamentary elections under the 1960 electoral law, cautioning that citizens would “take to the streets” to reject such a move, as Kataeb Party chief MP Sami Gemayel called for a non-sectarian electoral law based on the one-man, one-vote system.

“Let no one think of extending the parliament's term or the 1960 electoral law, because returning to any of them might lead to a revolution,” Berri urged.

After the meeting, Kataeb leader MP Sami Gemayel said: "I suggested the one-man, one-vote system in non-sectarian electoral districts in order to get out of the stalemate on the electoral law."

He also called for establishing a Senate that would represent the country's sects.

Hizbullah's MP Ali Fayyad meanwhile said a lot of ideas were raised around the dialogue table, “including the call for abolishing political sectarianism,” and noted that “all pending issues will be addressed in the August 2, 3 and 4 sessions.”

“Should we fail to agree on a consensual electoral law, we must move to discussing a package deal,” he suggested.

Former Minister Ghazi al-Aridi, who represented MP Walid Jumblat, said: “We have not agreed on a new president, nor on a new electoral system.”

"The proposal of holding a 'Lebanese Doha conference' is one of the ideas that were raised by Speaker Berri but it has not materialized until the moment," Aridi added.

As for the issue of oil and gas exploration, Foreign Minister Jebran Bassil said "the oil decrees have been delayed but better late than never."

The dialogue conference will resume for three consecutive days scheduled on August 2, 3 and 4 in a bid to reach an agreement over a new electoral law.

Al-Akhbar daily had reported that “Tuesday's session is one of the most important meetings in the current rounds of talks, given the issues that will be discussed and the Speaker's stance on the positions of the interlocutors.”

In May, Berri launched an initiative aimed at ending the political impasse. He called for shortening the term of parliament and that the elections be held based on the 1960 law should political forces fail to agree on a new electoral system.

The parliament extended its own term twice, the first time in 2013 and a second time in 2014. They were prompted by the political forces' failure to agree on a new electoral law.

The move sparked outrage in Lebanon.

from the horse's mouth!

The only two current politicians that I respect are Rifi and Sami Gemayel. Politicians like that are truly working for the people and for what is left of Lebanon sovereignty.

peace,
the two suggestions are both good for Lebanon. Cut the Parliament size to 80 MPs and 40 for the senate. You do need balance between majority representation and equal representation so minorities are not left out of power and decision making. Balance of power. This way you have both houses and still save salaried for 8 MPs

PLS go back to the law of 1950 myb they will agree on it these incompetent..hheheh