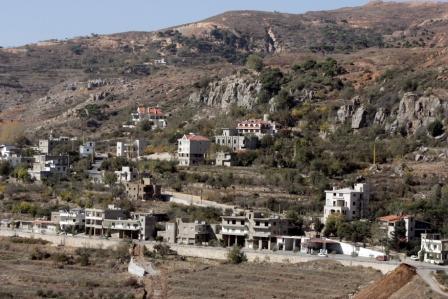 Hizbullah expanded its telecommunications network in several towns in the district of Zahle after its project failed in the Metn town of Tarshish, highly informed sources told al-Mustaqbal newspaper.

The sources said Thursday that the installment was made in the towns of Riyaq, Hawsh Hala and Hay al-Sellom several days ago.

The new move came after Hizbullah’s attempt to expand its “illegitimate telecom system failed in Tarshish,” they told the daily.

Last month, Hizbullah’s efforts to install the private telecoms network in the town were thwarted by residents and representatives from the municipality.

The dispute came to an end mid-November when the telecommunications ministry assured Tarshish residents that no private networks will be installed along with the ministry’s network.

This is an Iranian telecommunication network, installed with funds and technicians from Iran.

Remember that Iran ordered the murders of Hariri and others (allegedly), which is an act of war against Lebanon, and therefore all agents acting on behalf of Iran are TRAITORS.

Traitors acting on behalf of Iran should be arrested and treated the same as Israeli spies and CIA informants. Why the double standards?

This is an Iranian telecommunication network, installed with funds and technicians from Iran.

Remember that Iran ordered the murders of Hariri and others (allegedly), which is an act of war against Lebanon, and therefore all agents acting on behalf of Iran are TRAITORS.

Traitors acting on behalf of Iran should be arrested and treated the same as Israeli spies and CIA informants. Why the double standards?

people-power must be some broken record propaganda speaker tower, somebody please disconnect the plug..

you know when you say "remember Iran ordered.." I cant wait! to find out what evidence this so called tribunal is going to present to back your claim! i'm itching to find out! truly!!

by the way when is this tribunal supposed to take place? after six years and hundreds of million Dollars they better have something entertaining at least. must be the most expensive thriller ever made.

i only wish hizzy would love lebanon first

i only wish hizzy would pay for all their electricity

The Tarshish Network story was invented and a press distortion , the magnificent GMA said so . During that same press conference the master of the game GMA also said that the story of the Syrian army incursion into Lebanese territory was invented and a press distortion as well . Later President Assad apologized ton President Sleiman for the Syrian army's incursion into Lebanese territory . Obviously unlike the glorious and splendid GMA the magnificent President Assad doesn't know were the Lebanese Syrian border is and there was no need for him to apologize .

GMA always tells the complete truth , he was also martyred defending the Baabda presidential palace against a non invading Syrian army with kitchen utensils that's another non invented fact that the press distorts .

Why is there a need for an infrastructure and state under the Lebanese state, if Hizbollah chooses a partner as Iran to fund its strategies then other parties will choose Israel as their partner and build another infrastructure.
Until this whole undermining of the Lebanese state stops then each party and militia is going to partner with a foreign entity so that the fear of survival in Lebanon is gone. If the shia need Iran to live in Lebanon then the rest will use the United States/Europe/Arabs money to build their own state.
Israel did not assassinate the anti-Syrian regime politicians in Lebanon but rather Syria's agents executed, Israel spies on Iran, Israel could have assassinated Mughnieh in the heart of Damascus after the regime got paid for it.

Mowaten and Trin......... The STL officially opened on March 1, 2009. It is perfectly normal for the complexity of the crimes it is investigating to follow the time frame it is one.

The STL has indicted 4 members of Hezbollah for the murder of Hariri based on substantial evidence. They have not revealed all the evidence to the public, however they have sufficient evidence to implicate the Hezbollah members in the murder of Hariri, and the attempted murders of Murr, Hamade and Chidiac. If you are not convinced that Hezbollah was involved, then you can wait for the trial.

You cannot deny that Hezbollah is alleged to have killed Hariri, that is undeniable.

You also cannot deny that Hezbollah is subordinate to the Iranian Quds Force. Hezbollah was founded, trained, funded, and armed by Iran. If Hezbollah did kill Hariri, it is impossible to believe that they did so without being ordered to do so by Iran.

Sick baseless accusations??? Hahahahaha,...... you should do stand-up comedy

Mowaten..... it is interesting that you did not dispute that the telecommunication network is installed with Iranian funding, Iranian equipment, and with the aid of Iranian technicians.

There is no question that Hezbollah acts as agents of Iran. I'd like to see you deny that. Especially after Khameni says Hezbollah will attack Israel if Israel bombs Iran.

My point earlier was that Iran is a hostile country to Lebanon, not a friendly country. Hezbollah allegedly killed a former Prime Minister, and couldn't have done so without orders from Iran, which is tantamount to an act of war against Lebanon by Iran (if true).

If Iran ordered the killing of Hariri, and if Hezbollah carried out the crime, then Hezbollah is a traitorous organization, working for a hostile foreign government, and Hezbollah's leaders should be treated the same way as Israeli spies.

Do they offer high speed DSL internet on that network? low cost and more the 1Mps/Sec?