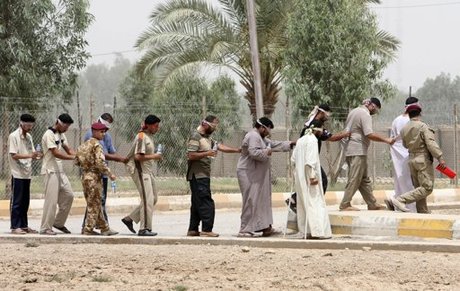 Iraq on Thursday executed 16 al-Qaida members convicted of involvement in the massacre of 70 people at a wedding, although they were officially put to death for other murders, a judicial spokesman said.

"Sixteen people were executed this morning," Abdelsattar Birakdar told Agence France, adding that "all of them were al-Qaida members."

Birakdar said that the 16 were convicted of involvement in the massacre of 70 people at a wedding in 2006, but were put to death for the sectarian murders of cooking gas salesmen.

Baghdad security spokesman Major General Qassim Atta said in May that "the gas sellers were from Sadr City in Baghdad. They used to come to the Taji area to sell gas to residents."

The Sadr City district in the north of the capital is overwhelmingly Shiite. Taji on the city outskirts is mainly Sunni Arab.

The gas sellers were killed in 2006 and their bodies set on fire, Atta said without specifying how many.

According to police, militants also carried out the systematic killing of a wedding party celebrating the marriage of a Shiite man to a Sunni woman in the Taji area in 2006.

The murders came as confessional violence was raging across Iraq, with tens of thousands killed in 2006 and 2007.