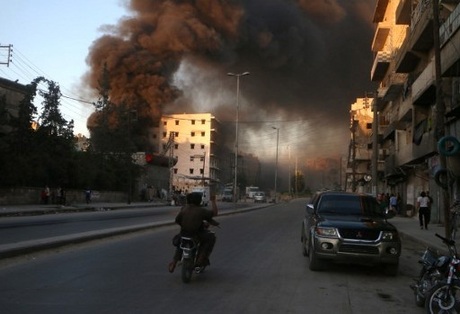 At least 29 Syrian rebels were killed in clashes with regime troops overnight during a failed bid to reopen the opposition's key supply route into Aleppo city, a monitor said Sunday.

The fighters from the Faylaq al-Sham Islamist faction and Al-Qaeda affiliate Al-Nusra Front were killed trying to reopen the Castello Road, which regime forces effectively severed on Thursday, the Syrian Observatory for Human Rights monitor said.

Such a wonderful kill on salafis, more to come.

like your terrorist criminal group of sectarian thugs are doing by protecting the lebanese-syrian border in aleppo!

Too bad it wasn't more.

Who cares? Let it all burn

terrorist you are so right!!!! People here forget how the Syrians treated the Lebanese people during the occupation. It did matter if they were sunnis or christian syrians. In fact most of the damage done onto us was by sunni syrians.

it did not* matter

Absolutely true. Even Syrian Christians hated Lebanon. I second you on that!!!