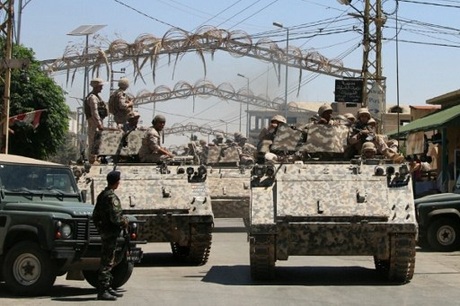 The three were charged with “staging acts of terror, carrying out two waves of suicide bombings in the town of al-Qaa, murdering and attempting to murder a number of civilians and other individuals, and sabotaging public and private property,” NNA said.

The case has been referred to First Military Examining Magistrate Riad Abu Ghida, the agency added.

A judicial source told AFP on Thursday that one of the three, a Syrian, had been arrested last week during the dismantling of an Islamic State-linked cell suspected of planning attacks across Lebanon.

The two others, one Syrian and another believed to be Lebanese, are still at large.

Al-Qaa is a predominantly Christian town nestled in a hilly border area that has been shaken by violence since Syria's conflict erupted in 2011.

The site of the dawn blasts lies on a main road linking the Syrian town of al-Qusayr to Lebanon's eastern Bekaa Valley.

Interior Minister Nouhad al-Mashnouq said the bombers came from the Islamic State group's bastion in the Syrian province of Raqa while Hizbullah chief Sayyed Hassan Nasrallah has said that they came from the IS posts in the outskirts of the nearby border town of Arsal.

Lebanon's army has fought off jihadist factions along the frontier and has sought to clamp down on local cells operating in the area.

In August 2014, the army fought deadly battles in and around the town of Arsal with militants from the IS and al-Nusra Front, al-Qaida's Syria affiliate.