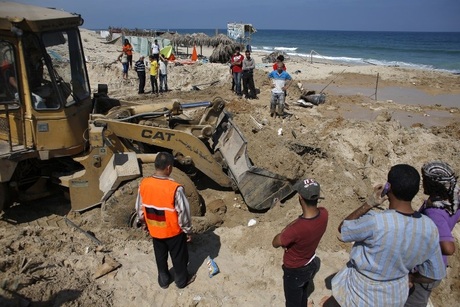 Clashes erupted Monday as Israel's military demolished the home of a Palestinian accused of involvement in a February attack outside Jerusalem's Old City that killed a policewoman, officials said.

The family home of Bilal Abu Zeid in Qabatiya, in the north of the occupied West Bank, was destroyed by a bulldozer around 2:00 am (2300 GMT), Israel's army said.

Clashes erupted when the military convoy arrived, with Israel's military saying soldiers responded after being targeted by Molotov cocktails and fire from improvised guns.

Israel regularly destroys the homes of Palestinian attackers in what it says is a deterrent.

Rights groups and Palestinians condemn the practice as collective punishment that forces family members to pay for the crimes of others.

Abu Zeid is accused of having assisted three Palestinian attackers in the February 3 incident that killed the police officer and badly wounded another outside the Old City's Damascus Gate.

He is currently imprisoned by Israel. Details on how he allegedly assisted the attackers were not provided.

The three Palestinians were armed with rifles, knives and explosives, Israeli authorities said at the time, and the policewoman died from a gunshot wound to the head.

The three attackers were killed at the scene and their family homes were demolished two months later.

Since October, around 10 Palestinians from Qabatiya have been killed while carrying out attacks against Israelis.

Violence in Israel and the Palestinian territories since October has killed at least 215 Palestinians, 34 Israelis, two Americans, an Eritrean and a Sudanese.

Most of the Palestinians killed were carrying out knife, gun or car-ramming attacks, according to Israeli authorities.

Others were shot dead during protests and clashes, while some were killed by Israeli air strikes in the Gaza Strip.