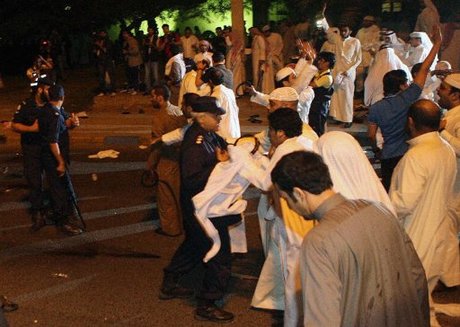 "After interrogation all night, the public prosecutor this morning remanded them in police custody until Thursday night when questioning will resume," said Al-Humaidi al-Subaie, coordinator of the opposition defense team.

Hundreds of opposition activists stormed the sea-side assembly on November 16 after clashes with riot police that followed a large protest to demand the resignation of the prime minister and that parliament be dissolved.

Kuwait's emir, Sheikh Sabah al-Ahmad al-Sabah, on Sunday called the incident a "black day" for the oil-rich Gulf state which has been witnessing heightened tension between the ruling family led government and opposition MPs.

The activists have been questioned on charges of damaging public property, storming parliament, illegal procession, assaulting police and others for which they "face a jail term of between six months and a life term," Subaie told Agence France Presse.

Some of the activists were arrested on Wednesday while the rest handed themselves in while more plan to surrender Thursday, the lawyer said.

Subaie had said on Wednesday that the public prosecutor issued around 50 arrest warrants and more warrants were expected to be issued.

Riot police on Wednesday beat up with batons supporters and relatives of the activists who gathered outside a police headquarters east of the capital Kuwait City.

Dozens of supporters led by several opposition MPs spent the night outside the palace of justice in Kuwait City where questioning took place.

Opposition MP Mussallam al-Barrak announced at the gathering that the opposition will hold an emergency meeting Thursday to decide its next course of action ahead of a planned anti-government rally on Monday.

MP Khaled al-Tahus said opposition activists plan to camp in a square opposite parliament for at least two days starting Sunday to press for a change of government.

The emirate's opposition launched the campaign aiming to change the prime minister and dissolve parliament following an alleged corruption scandal involving around 15 MPs.

The opposition has also accused Prime Minister Sheikh Nasser Mohammad al-Ahmad Al-Sabah, a senior member of the ruling family, of transferring public funds into his overseas bank accounts. The government has denied the charge.

OPEC member Kuwait sits on about 10 percent of the global crude oil reserves and currently pumps around 3.0 million barrels per day.