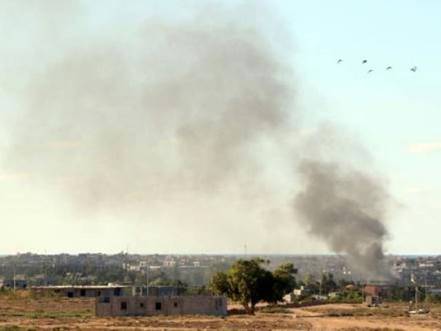 French, British and American soldiers are in Libya to "monitor" Islamic State group jihadists, a military commander in the east of the country told Agence France Presse on Thursday.

"French, American and British soldiers are in the Benina base" near Benghazi, said air force chief Saqr al-Jaroushi, whose forces are allied with a government based out of the eastern city of Tobruk that is not recognized by the international community.

He said around 20 soldiers at the base were charged with "monitoring the movements of the Islamic State jihadists and how they store ammunition."

"There are no (foreign) pilots fighting in the place of our pilots and fighters," he said.

He added that other foreign military personnel were carrying out similar tasks at other bases and towns across Libya, including the capital Tripoli, Misrata, 200 kilometers (125 miles) to the east and Tobruk in the far east of the country.

Jaroushi commands the air force that forms part of the forces loyal to General Khalifa Haftar and the House of Representatives in Tobruk, a rival to the Government of National Unity (GNA) that operates out of Tripoli.

France, Britain and the U.S. recognize the GNA as the legitimate government of Libya.

Jaroushi's remarks come a day after the GNA criticized the presence of French troops in the chaos-wracked country, as President Francois Hollande confirmed France has soldiers there after three died in a helicopter crash.

The soldiers were carrying out a reconnaissance mission alongside Haftar's troops.

The presence of the troops in Libya was a "violation" of the nation's sovereignty, the GNA said on its Facebook page following Hollande's announcement.

The Pentagon said in May that it has a "small presence" in Libya tasked with trying to identify which groups might be able to assist the United States in its mission to combat IS.

British media reported in May that British special forces had taken part in combat missions against IS in the country's northeast.

- Battle for Sirte rages on -For two months, pro-government forces have been fighting fierce clashes against IS jihadists in their stronghold of Sirte in central Libya.

On Thursday, the troops claimed they had secured "advances... on two fronts" in Sirte, after pounding jihadist positions with aerial and heavy artillery raids.

Twenty-two pro-government troops were killed in the fighting on Thursday and another 175 were wounded, a Misrata hospital official said.

A total of 280 troops have been killed and 1,500 have been injured since the bid to recapture Sirte was launched in May.

A victory in Sirte would help the UN-backed government build its credibility, as it struggles to assert its authority over a nation steeped in violence.