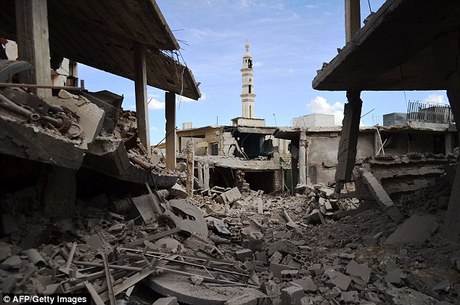 Russian warplanes bombed a remote outpost in Syria used by elite U.S. and British forces last month as well as another site linked to the CIA, the Wall Street Journal reported Friday.

The Journal, which cited U.S. officials as its source, said the previously unreported air strikes on June 16 and July 12 were part of a bid by Moscow to pressure Washington to cooperate more closely with it in the skies over Syria.

A contingent of about 20 British special forces had pulled out the day before the first attack on June 16, on a garrison about 10 miles (16 kilometers) from the Jordanian border at At-Tanf, the report said.

U.S. officials and rebel commanders told the Journal that the outpost was hit with cluster munitions.

U.S. attempts to wave off the Russians failed to prevent a second air strike on the base, the report said.

U.S. military and intelligence officials told the newspaper that the attacks hardened opposition at the Pentagon and the CIA to cooperating with the Russians.

But the White House and the State Department, seeking to avoid a military escalation, decided to pursue a compromise, it said.

Last week, U.S. Secretary of State John Kerry reached a provisional agreement with the Russians to join forces in strikes on Al-Nusra, the al-Qaida affiliate in Syria.

Under the agreement, the Russians would halt air strikes against U.S.-backed rebels and restrain the Syrian air force in return for Washington easing Moscow's international isolation, the Journal said.

U.S. officials and rebel commanders told the Journal that the outpost was hit with cluster munitions.

Russians using cluster bombs munition in Syria? mowaten of Iran said only the saudis did that in Yemen.

If Christians in Lebanon didn't have Muslims to persecute, they'd have to think about their lives.