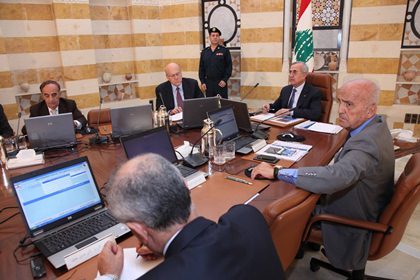 Cabinet postponed its session on Friday due to the lack of quorum after the Change and Reform ministers did not attend the meeting, which was expected to be held at the Baabda palace.

The ministers chose not to attend the session because of they are reportedly upset over the way they have been treated by the government, reported OTV.

It added that the ministers’ decision stemmed from their position from the funding of the Special Tribunal for Lebanon, even though the session was not expected to tackle this matter.

Energy Minister Jebran Bassil meanwhile told Agence France Presse that the Change and Reform ministers’ actions are a “first warning to their objection to the government’s performance.”

He refused to clarify if the stance is response to Prime Minister Najib Miqati’s recent hints that he may step down if the government failed to fund the STL.

“We have other issues that are more important than the tribunal,” added the minister.

Furthermore, he revealed that the Change and Reform bloc will hold a meeting, headed by Free Patriotic Movement leader MP Michel Aoun, on Saturday to announce a clear stand from the governmental situation.

Culture Minister Gaby Layyoun reiterated Bassil’s positions, saying that the Change and Reform ministers are part of the government because they are seeking to implement a project that all the Lebanese are awaiting.

“Recently however we have not seen any efforts to ensure the success of this project, but simply attempts to obstruct it,” he told Voice of Lebanon radio.

“The people’s interests are more important than the STL. The tribunal is a secondary matter,” he stressed.

“Our resignation is possible at any moment,” he noted.

The government was expected to address the draft law on allowing expatriates from regaining their nationality, as well as laws on money laundering and tax information.

Sources close to Aoun told As Safir newspaper in remarks published on Friday that several reasons have forced the Change and Reform ministers to seriously consider resigning from the government.

“The government’s performance has not changed from the previous Hariri cabinets as demonstrated in the protection of some symbols of the previous governments and the deliberate obstruction of administrative, judicial, and diplomatic appointments,” they added.

Cabinet is expected to convene on Wednesday to address the funding of the STL, which has created tensions among the government members, as well as the rival March 8 and14 camps, with the former insisting on thwarting the funding and the latter insisting that Lebanon respect its international commitments.

there is a handful of people holding this country hostage and Mr. Aoun is the head of these thugs . either you do what i say or I'm going to throw a temper tantrum and sabotage your work . this is not a government that represent the people anyway so let them resign

The clowns should resign and put this government out of its misery. Aoun and his clowns will otherwise drag Lebanon into a leper colony made of Iran, Assad (for however long he survives), and Hezbollah.

STL is not a problem, it is here anyway....even funding is not a problem,becose the tribunal is there to stay...the real problem for aoun and his kronies to CHOSE NOW: THEY SUPPORT THE ALAWI REGIME YES OR NOT..WITH ALL THE CONSEQUENCES...
OR HAKIM WILL BE THE SAVIOR.
PLSE DONT SAY ITS NOT CLEAR.

It is the STL funding issue and nothing else. Word today that Mikati may have the votes, if the vote were today caused the word to be sent from Aoun's paymasters to take this action. It is cover so that Hezbollah is not exposed as the precipitating factor collapsing the gov't over the STL issue.

Problem is that the veneer is too thin. We can all see what Hezbollah tries to hide. Aoun is far too solicitous and greedy for his money, so he goes too hard and is too obvious, leaving Hezbollah exposed as the precipitating actor causing the resignation of the Mikati gov't.

“The people’s interests are more important than the STL."
how dare they say that????

the death of innocent lebanese is not their concern? are lebanese citizens not worth of their compassion and search for their killers? apart from hariri lots of innocents stand byers were killed! not their problem?

and all the others are just not worth a trial?....
who are those heartless irresponsible people? in their minds lebanese are worth shit...if they don t bring them money or votes.

those M8 leaders belong in the sewers that s all...

Peace...how about the hundreds of children killed by your American allies in Qana and elsewhere. You M14 traitors kissed Condi Rice after that happened. That does not bother traitors like you.