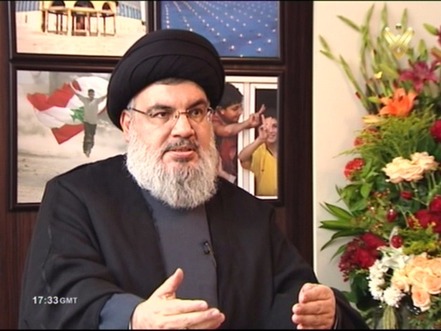 Hizbullah chief Sayyed Hassan Nasrallah noted in an interview aired Friday that the Lebanese army has the ability to eradicate the jihadist groups that are entrenched in the outskirts of the restive northeastern border town of Arsal.

“The Lebanese army has the ability to win the battle in Arsal's outskirts but there is no political decision,” Nasrallah told Hizbullah's al-Manar television.

He even alleged that one of the groups operating in Arsal's outskirts, which was formerly known as al-Nusra Front, has “allies in the Lebanese government.”

Al-Nusra has renamed itself Fateh al-Sham Front after renouncing its status as al-Qaida's Syrian affiliate.

Militants from the group and its jihadist rival, Islamic State, are entrenched in rugged areas along the undemarcated Lebanese-Syrian border and the army regularly shells their posts while Hizbullah and the Syrian army have engaged in clashes with them on the Syrian side of the border.

Separately, Nasrallah declared that he is “confident” that Hizbullah “would emerge victorious from any new war with Israel.”

He also revealed that he has not been “living in a bunker in the past ten years” to avoid Israeli assassination attempts and that he does not meet his visitors in a bomb shelter.

“The July war was aimed at eliminating the resistance in Lebanon, Syria and Palestine, and eventually isolating Iran,” Nasrallah pointed out.

“What's happening in Syria is a form of revenge and a completion of the July war,” he noted.

“The Israelis knew that direct war would not lead to Hizbullah's defeat and that a war with Iran was not useful, that's why the choice was to take out Syria from the axis of resistance,” Hizbullah's leader explained.

He also disclosed that most rockets that Hizbullah fired at Israel in the July war were “manufactured in Syria's military factories,” not in Iran.

“The Arab states' warming of ties with Syria after the July war was aimed at pulling Syria out of the axis of resistance,” Nasrallah added.

Turning to the situation in Lebanon during the 2006 war, Nasrallah claimed that some parties “tried to confine the Lebanese army.”

“But it acted in line with its patriotic creed and with a spirit of honor and loyalty, and within its capabilities it offered a lot of martyrs and wounded and facilitated a lot of issues to the resistance,” Nasrallah added.

“Someone wanted to create a clash between the army and the resistance and the then prime minister Fouad Saniora ordered the Army Command to seize a truck carrying missiles from the Bekaa to the South during the July war,” Nasrallah said.

“But Speaker Nabih Berri and the then president Emile Lahoud interfered back and we even launched a threat that we would take action that changes the course of the country should someone try to put us in a confrontation with the army,” Hizbullah's chief revealed.

“The July war was aimed at eliminating the resistance in Lebanon, Syria and Palestine, and eventually isolating Iran”

that's right and law kuntoo a3lam I wouldn't have started it duh!.. no what!

Be fair 1anonymetexasusa , they did capture the same hill 4-5 times.

"Separately, Nasrallah declared that he is “confident” that Hizbullah “would emerge victorious from any new war with Israel."
Oh yeah....definitely. Over by Sunday, wallaw.

Their filthy militia are hurt, therefore all the unnecessary Israel diversions.

A repulsive creature with no credibility that strives on lies, distortion, and sectarian hate.

Nasrallah: Nusra Has Allies in Govt.

and you also have allies in the government, where is the problem?

The Watan, Lebanese Armed Forces have the ability to win most battles and threats to the republic with the exception to the Israeli theat! Give them the arms and weapons and real domestic and foreign support... and the LAF can defend all and every threat!

A bankrupt sectarian terrorist adds nothing to his already expired rhetoric.