Murder Charge for U.S. Man in Slaying of Lebanese Neighbor 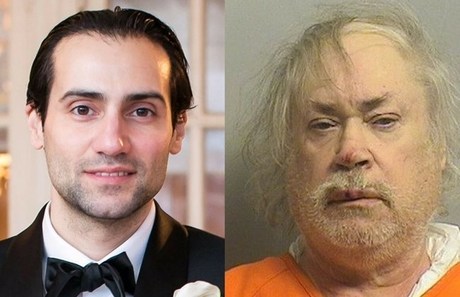 U.S. prosecutors have charged a Tulsa man with first-degree murder and committing a hate crime in the killing of his Lebanese neighbor -- a culmination of what authorities said was the man's violent feud with the family that spanned several years and included a regular barrage of racial insults and personal confrontations.

Stanley Majors, 61, was also charged with being a felon in possession of a firearm and threatening a violent act in the Aug. 12 fatal shooting of 37-year-old Khalid Jabara. The hate crime charge is a misdemeanor under Oklahoma law and accuses Majors of intimidating and harassing Jabara and his mother, Haifa Jabara, "because of race, color, religion, ancestry and national origin," according to court papers filed Tuesday by prosecutors.

Majors marked at least the 17th case since 2008 where Tulsa County prosecutors filed a hate crime charge, according to court records. The cases include the 2012 Easter weekend shooting deaths of three black residents. Alvin Watts, who is white, and Jake England, who said he was Cherokee Indian, pleaded guilty to the killings in 2013 and were sentenced to life in prison without parole.

"The death of Khalid Jabara is tragic and our sympathies are with his family," Tulsa County District Attorney Steve Kunzweiler said in a statement Tuesday. Majors is scheduled for arraignment in district court on Wednesday. An Associated Press message left for Majors' attorney was not immediately returned Tuesday.

Majors spent years in conflict with the Jabara family, often hurling epithets such as "filthy Lebanese," ''dirty Arabs" and "Moo-slems" at his next-door neighbors, authorities said. The Jabaras are actually Christian.

Lebanese emigrants have long been a visible part of the Oklahoma population, with many making their living as merchants, restaurateurs and grocers.

"Our parents raised us to be patriotic Americans, proud of our Lebanese heritage and our community's contributions to our country," said Jabara family spokeswoman Rebecca Abou-Chedid. "In charging Majors with a hate crime in addition to first-degree murder, the district attorney's office is making a much-needed and powerful statement that hatred and violence based on race, color, religion, ancestry and national origin has no place in our society."

"In the last year, hate crimes targeting Arabs, Muslims, and those perceived to be either have skyrocketed," Madihha Ahussain, Muslim Advocates staff attorney and lead for the Program to Counter Anti-Muslim Hate, said in the letter. "Unfortunately, there has also been a pattern of law enforcement officials minimizing the possibility that these crimes may be motivated by bigotry, sending a dangerous message that hate violence is not taken seriously."

Officer Jeanne MacKenzie, a Tulsa Police spokeswoman, said Tuesday that her agency investigates every case "to the fullest."

"We don't exclude anything or anybody by race or sexual preference or anything like that," she said.

Bartlett said he has scheduled a meeting with the city's public safety departments and the district attorney's office "to make sure we are doing everything in our power to ensure the safety of our community."

"The city stands by the Jabara family in this time of need and they will continue to be in our thoughts and prayers," the mayor said in a statement.

The alleged abuse between the neighbors escalated to the point where Haifa Jabara obtained a protective order in 2013 that required Majors to stay 300 yards away and prohibited him from possessing any firearms until 2018. Majors also had a 2009 felony conviction from California for threatening a crime with intent to terrorize.

But last year, Majors was accused of plowing his car into Khalid's mother, Haifa Jabara. She suffered a broken shoulder, among other injuries. After Majors struck her, he kept driving, prosecutors said. Officers who stopped him later reported that he was intoxicated. Prosecutors charged majors last September with assault and battery with a dangerous weapon, leaving the scene of a collision violating the protective order and public intoxication.

Majors' conflict with the Jabara family also put him at odds with his husband, Stephen Schmauss, who came to befriend Khalid and thought of him as an apprentice, teaching him how to use power tools and computer circuitry. Last week, Schmauss said his husband had killed his "best friend."

Khalid Jabara's slaying drew national attention in the United States, including a mention from presidential candidate Hillary Clinton, who said her "heart breaks" for Jabara's loved ones.

Schmauss tried to explain Majors' comments, saying his husband is "textbook bipolar" and a diabetic who refuses to take any medication. Schmauss said anything Majors said to the Jabara family was "done under the bipolar situation."

While awaiting trial for assault and battery, a judge freed Majors from jail on $60,000 bond, overruling strong objections by Tulsa County prosecutors, who called him "a substantial risk to the public" and pleaded with the court to set a higher bond of $300,000.

Schmauss, who claims that his cellphone was shattered when Majors fired at least five rounds from a handgun inside the couple's house the day Khalid Jabara was killed, said in an e-mail that he can't attend his husband's arraignment on Wednesday because he is undergoing radiation therapy for cancer.

"My cancer is so painful, requiring me to take strong pain pills that make me sleepy," he said. "I will visit (Majors) on my feel good days in the future.

"I am saddened and may never recover from this event," he said.

It's because of these Houthians basically Christians have become the scapegoats. They brought Lebanon to the category of Iranian suburb, ruining the reputation. So Iranians are basically happy Christians are taking the hits for them. Thanks guys!...sellouts.

nothing to do with saudis, their salafism, their qaeda and daesh outlets and their bloody massacres around the world.

his behavior is more like the one of your salafis/takfiris friends, intolerant hateful and retarded