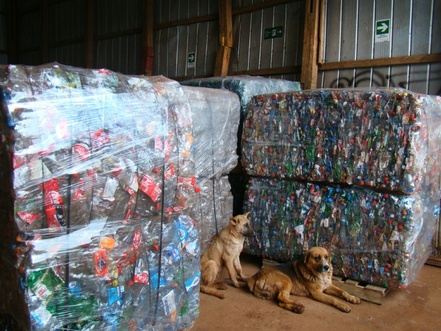 Every Friday, a cargo plane loaded with three tonnes of waste cardboard takes off from wind-swept Easter Island, bound for the Chilean mainland thousands of miles away across the Pacific.

On the first Thursday of each month, it takes two tonnes of waste plastic for recycling; on the last, an equal load of aluminum.

With tourists drawn by the island's famous ancient statues churning out seven tonnes of waste a day, its residents are learning the hard way to recycle.

Officials want them to stop throwing their trash indiscriminately into the garbage dump on an island of just 165 square kilometers (64 square miles).

"If we find takers for all these kinds of waste that we produce, we will send it all to them," laughed Marcos Haoa, who helps run the island's recycling center. "We will give it away free!"

- Tourist trash -Easter Island lies some 3,700 kilometers (2,300 miles) from the coast of mainland Chile, which governs it.

Virtually everything consumed on the island is imported for its 6,500 residents and many times more tourists.

Last year, some 95,000 outside visitors came to the island, drawn by its "moai" -- charismatic tribal statues that date back centuries.

The island's authorities estimate that between now and 2025, it will import 32 tonnes of cardboard, 18 of plastic, 12 of aluminum cans and nine of glass.

However, only a fifth of the island's waste is sent for recycling, says its municipal environmental education chief, Varoia Ike.

The remaining 80 percent goes into the island's sole garbage dump.

No more than 40 percent of the island's inhabitants sort their rubbish for recycling, the council estimates.

Of those that do, "not all of them do it right," Ike said.

"We depend on recycling companies from the continent. They demand that the rubbish be clean and dry, and only half of ours comes in the right state."

Elsewhere on the island stands a music school built from recycled waste by the US architect Michael Reynolds, a specialist in environmentally sustainable construction known as the "garbage warrior."

- Pacific plastic -The island's garbage threat comes not only from within, however.

It also suffers waves of trash from the sea.

Pacific currents wash together masses of waste plastic in the ocean.

Environmentalists say fishing boats trawling for tuna and marlin in the area dump unwanted nets and plastic that end up on the island's beaches or in the stomachs of sea creatures.

Islanders in 2014 founded the Mesa del Mar (Marine Roundtable), a grouping of local associations pushing for the establishment of a marine protected zone to stop illegal fishing around the island.

She organizes rubbish-collecting parties of local volunteers up to four times a year.

A local company donates 100 garbage bags a month. The volunteers fill them and lug them away on their own backs or by horse.

In the last such outing in May, 150 volunteers picked up almost two tonnes of trash.

"That's not enough," Huke said. "It just gets taken out of the sea and brought to the dump. That's very discouraging."