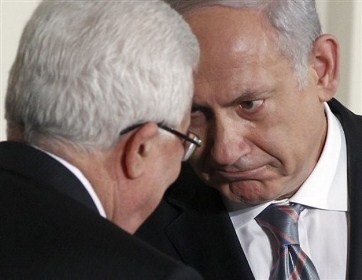 The remarks follow Netanyahu's claim during an address rejecting criticism of Israeli settlement building that the Palestinians were seeking a state with "no Jews."

Netanyahu called that "ethnic cleansing," drawing a strong rebuke from the United States.

Speaking on Sunday night before the Eid al-Adha Muslim festival, Abbas said the Israelis "don't want to progress one iota towards peace, in spite of their deceptive allegations."

"On the contrary, they go deeper with their settlements, infringement of holy places, ethnic cleansing and deliberate killing," he said, according to official Palestinian news agency WAFA.

In a video address on Friday, Netanyahu said that the Palestinian leadership wanted a state on the basis of "no Jews."

"There's a phrase for that, it is called ethnic cleansing," he said.

The U.S. State Department called the video "unhelpful" and "inappropriate."

"We obviously strongly disagree with the characterization that those who oppose settlement activity or view it as an obstacle to peace are somehow calling for ethnic cleansing of Jews from the West Bank," spokeswoman Elizabeth Trudeau said.

The Palestinian leader has made the allegation against Israel before.

Palestinians accuse Israel of ethnic cleansing during the war surrounding the creation of Israel in 1948, a claim the Israelis deny.

In his Eid address, Abbas also reiterated he was in favor of meeting Netanyahu in Russia, with President Vladimir Putin looking to mediate between the two sides.

Netanyahu has said he is ready to meet Abbas anywhere and at any time, but without preconditions.

Abbas did not say whether he had preconditions, but in the past the Palestinians have demanded a freeze in Israeli settlement building, a deadline for the end of the occupation of the West Bank and the release of prisoners.

"In recent days, we have agreed to a meeting with Israeli Prime Minister Benjamin Netanyahu on the kind invitation of the Russian president," Abbas said.

Netanyahu again spoke of such a meeting as he met Luxembourg Prime Minister Xavier Bettel in Jerusalem on Monday.

"Prime Minister Bettel invited me to Luxembourg but he also said maybe the Palestinians will come there," Netanyahu said.

"Well, it's either Moscow or Luxembourg. We'll see, one of them or anywhere else. We're always prepared to have direct negotiations without preconditions."

The last substantial public meeting between Abbas and Netanyahu is thought to have been in 2010, though there have been unconfirmed reports of secret meetings since then.

Peace efforts have been at a standstill since a U.S.-led initiative collapsed in April 2014.