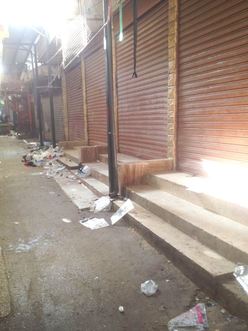 Residents in the Palestinian refugee camp of Ain el-Hilweh in Sidon, held a general strike on Tuesday in protest to the recurrent killings in the camp the latest was against Palestinian Simon Taha who was killed Monday night in the al-Fawqani street, the National News Agency reported.

UNRWA schools, business , health and social institutions were closed. The main road in the al-Tahtani street was blocked in condemnation of the crimes “targeting the security and stability of Ain al-Hilweh camp,” added NNA.

The strike came at the invitation of the Popular Palestinian Committees that rejected recurrent killings and in solidarity with the family of Taha.

The family of the deceased said that the strike will be “open and the road will be blocked until the perpetrators are found and punished.”

The camp is home to about 50,000 refugees who live in dire conditions.

Such incidents have become frequent in recent years in Ain el-Hilweh, the largest of Lebanon's 12 Palestinian refugee camps.

But the camp is also home to more than 54,000 registered Palestinian refugees who have been joined in recent years by thousands of Palestinians fleeing the fighting in Syria.

More than 450,000 Palestinians are registered in Lebanon with the U.N. agency for Palestinian refugees UNRWA.