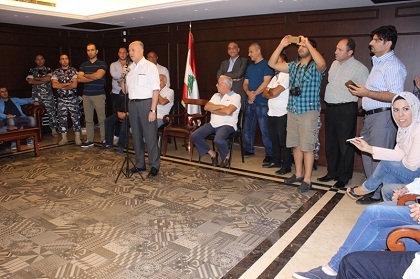 Resigned Justice Minister Ashraf Rifi has warned against what he called “surrendering the presidency” to the candidates of “Bashar Assad and Iran's project,” in reference to Marada Movement chief MP Suleiman Franjieh and Free Patriotic Movement founder MP Michel Aoun.

“We will not allow what's happening in Baghdad, Damascus and Sanaa to happen in Beirut and we will be fierce fighters in defending our Arab and Lebanese identity and in preventing the Iranian axis from changing it,” Rifi vowed during a meeting with popular delegations in Tripoli.

“The nomination of any political figure who is close to Hizbullah or Bashar Assad is a great surrender and we would be selling ourselves cheaply should we nominate Suleiman Franjieh or Michel Aoun,” the minister warned.

“Any candidate from this camp is a nomination against our principles and cause and we would be surrendering our country to the project of Bashar Assad and Iran. That's why we will object fiercely and we will never be lenient in this issue,” Rifi added.

“We should not surrender the head of the state to those who are in the service of the projects of Iran and Assad,” he stressed.

And calling for a “return to principles,” the resigned minister underlined that his hand is “extended to everyone.”

“My project is to struggle for the cause for which hundreds of people were martyred, topped by slain ex-PM Rafik Hariri,” Rifi noted.

The resigned minister has strongly criticized a decision by al-Mustaqbal Movement leader ex-PM Saad Hariri to nominate Franjieh for the presidency.

Lebanon has been without a president since the term of Michel Suleiman ended in May 2014 and Hizbullah, Aoun's Change and Reform bloc and some of their allies have been boycotting the parliament's electoral sessions, demanding a prior agreement on the identity of the president.

Hariri, who is close to Saudi Arabia, launched an initiative in late 2015 to nominate Franjieh for the presidency in a bid to break the deadlock but his proposal was met with reservations from the country's main Christian parties as well as Hizbullah.

This is an unwavering man, loyal to his principles, puts Lebanon first, and could care less about positions and political dynasties.

“We should not surrender the head of the state to those who are in the service of the projects of Iran and Assad,” Rifi stressed.

Hariri claimed by nominating Franjieh he would break the deadlock. It resulted in him losing whatever Christian support he may have had and the vast majority of the Sunnis....... and the deadlock continues.

Geagea reacted by nominating Aoun which lost him the Sunni support but did not win him the Shia support.

Rifi is the only man who has stayed the course. He will win the elections by a landslide.

He will not be accepted as a Prime Minister by the other factions.

Very much just like the March 14 Western people of Naharnet can mock and talk here, but in Lebanon events remains different.

according to the iranian sellouts, if you refuse handing over the country to iran or syria then you are an extremist and should be deported. But when nassrallah says his money, weapons, salary, and food comes from iran he is a hero.

the only one screaming is your iranian voice.

This man is winning the heart and soul of every true Lebanese.

no no Israel will do it because he is anti hezbollah and Iran.

terrorist wrote and no one dared to respond to the dark ages culture:

The grand Ayatollah Khamenei issued a decree forbidding women to ride bicycles in Iran because it is Haram.

He said, "Riding bicycle often attracts the attention of men and exposes the society to corruption, and thus contravenes women's chastity, and it must be abandoned,”according to the state-run media, September 10, 2016.
the Ayatollah issued the fatwa because he said the bike ride stimulates the clitoris and makes the vagina wet.
In his declaration a week before,when he spoke about the "direction of the state" and general policies on "family”; Khamenei defined women's only "role and mission" as "motherhood and housekeeping".

Who would want to live under a backaged culture? Do the Lebanese Shi3a want to go backwards along this kind of model?

Rifi is against Assad puppets but wants Frangieh? LOL!

and how did you gather that? Do you know how to read?

"Resigned Justice Minister Ashraf Rifi has warned against what he called “surrendering the presidency” to the candidates of “Bashar Assad and Iran's project,” in reference to Marada Movement chief MP Suleiman Franjieh and Free Patriotic Movement founder MP Michel Aoun."