Suleiman Fears the Collapse of Cabinet as Berri Expresses Optimism 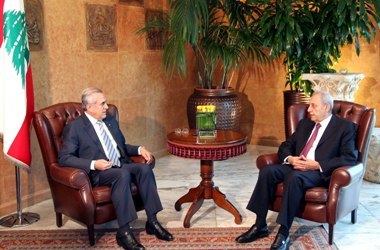 President Michel Suleiman said on Wednesday that the collapse of the cabinet will have negative repercussions on Lebanon as Speaker Nabih Berri expected that the majority will reach a safe haven concerning the crisis.

Sources close to Suleiman told As Safir newspaper that the president agreed with officials he met on Tuesday that “no one has an interest in forcing the collapse of the current cabinet.”

“The consecutive developments in the region require (Lebanon) to have active constitutional institutions … as it will be difficult to form a new cabinet amid the current political rift,” the sources said.

They noted that the officials calmed their rhetoric as they are seeking to resolve the rift over the funding of the Special Tribunal for Lebanon in an attempt to preserve the government’s unity.

The funding of the STL has created a rift between the cabinet members, threatening its collapse as Lebanon is required to pay around $33 million dues.

For his part, Speaker Berri was optimistic on Wednesday concerning the crisis threatening the cabinet as he expected the majority to resolve the crisis.

He said in remarks published in As Safir that the government members will reach a solution that will preserve its tenure and stimulate its productivity.