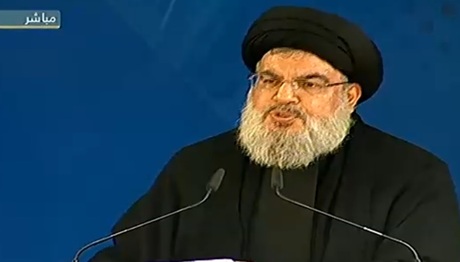 Hizbullah leader Sayyed Hassan Nasrallah stressed on Wednesday that the army, people and Resistance equation protects Lebanon as he refused any attempts aiming to obstruct the government’s work.

“The army, people and Resistance equation protects us and we refuse obstructing the government under any pretext,” stressed Nasrallah in the second live appearance within 24 hours addressing thousands of supporters in the southern suburb of Beirut marking Ashoura.

Ashoura is one of the most important festivals on the Shiite Muslim calendar.

Turning to the role of the Resistance, he said: “The Resistance will continue to watch Israel and Lebanon's southern border. Lebanon's power is embodied in its army, people and Resistance, it is what deters the Israeli enemy.

“We will keep our eyes open on the southern border, similarly we will watch the eastern border to confront the takfiris.”

Lashing out at Saudi Arabia he said: “Saudi Arabia's battles in Yemen are to express the hatred of the Saudi regime against Yemen.”

A strike on a funeral ceremony in Yemen on Saturday was one of the deadliest attacks since the Saudi-led coalition launched a bombing campaign against Shiite rebels there in March 2015.

Nasrallah accused Saudi warplanes of carrying out the raid, echoing Yemen's Huthi rebels who blamed the Riyadh-led coalition for the strike.

“The Saud family will be defeated in Yemen,” he went on to say.

For Shiites around the world, Ashura is a symbol of the struggle against oppression as it commemorates the assassination of Imam Hussein, grandson of the Prophet Muhammad, in 680.

so why do you complain when those you are unjustly fighting come and fight you inside Lebanon?

.mowaten. I'm not a big poster here but I have been using this site for over 38 years and recently I have been liking your posts, you're the only one informing these deluded ignorants. :)

Saudi.wahabi backs the takfiri salafisthat invades Lebanon, I wonder why he claims to be masi7i when he is a salafi?

It justifies the Resistance action in Syria, because they slaughter real christians in Syria and even in Lebanon, those people have the same mentality as you saud.wahabi

Even on an article regarding the 'Golden Equation', I find you @mowaten spamming, trolling, and terrorizing other posters. What kind of person are you? New evidence surfaces by the minute that you are a paid poster but the question remains who pays you and for what exact purpose? Is it the Iranian embassy, is it the revolutionary guard, is it the syrian intelligence or the ex-KGB? These questions must be answered by you and NOW!

in Bahrain and Yemen you are fighting the 'takfiris'?:)! The fact is you 'people' are the real takfiris.

enterprise > hezbollah is not fighting in bahrein and yemen. in the former there are millions of people peacefully protesting for their rights, and in the latter the yemenis are doing a great job on their own, handing the saudis their.. "backends" to them.

your master admitted several times he is in bahrain and yemen unless you are blind and deaf. As to the millions in Bahrain protesting peacefully all I can say is WOW! The total population of Bahrain is around 1.2 million of all sects. How can it be millions protesting?:) Peaceful is another claim similar to your iranian militia claim's to resistance.

:)))
Distortion, lies, and exaggeration are among the top tools in a professional propagandist's backpack.

i think you meant "yemen" where you said "bahrain", but when the whole statement is false, what difference does a little mixup like that make, right?

please show me where and when nasrallah "admitted" being in yemen and bahrein. i'll be waiting.

if you read the criminal's quote in the first post of this thread you would not be derailing the discussion. You must have taken some serious blows to your head while celebrating ashura today.

i'm not sure what you're trying to say with your gibberish, but to be honest i dont really care. please log back with your "enterprise" account and answer my question. still waiting.

Your accusations will not negate the proven fact you are a paid iranian propagandist with multiple accounts. You are absolutely sure of what is being said because it is crystal clear but when cornered and your lies are proven you choose to derail the discussion in your typical trolling fashion.

Lashing out at Saudi Arabia he said: “Saudi Arabia's battles in Yemen are to express the hatred of the Saudi regime against Yemen.”

But your battles in Yemen, Iraq, and Syria are to express the love you and your iranian masters have for the people of these countries.

Nasrallah: We will continue to bear the responsibility in Syria. It is where your son and husbands are, defending the people, Palestine and the Resistance.

Palestine is always on his mind:)!

this man is deluded and lives on a galaxy far away))

yeah resistance in Arab countries as he admitted in Syria, Iraq, Yemen and Bahrain but not Israel.

Israel is the main objective: south Lebanon liberation, deterring 2006's agression and meanwhile on guard. thus, the zionist state considers the Lebanese resistance the only active enemy, while the resistance's role in Syria is to avoid the country to be converted into another zionist puppet as the rest of "arab" countries.

"this man is deluded and lives on a galaxy far away":

wrong! this is what's really being carried out on the ground....who's deluded!?, you.

the day this iranian sectarian terrorist is brutally murdered is the day we celebrate our independence.

if you think murdering him will help your situation in israel then think again.

Which country are you a mowaten of ? Yemen, Iran, Iraq or Syria...... Certainly not Lebanon, Oh No!

The Houthians need to be eradicated quickly and swiftly. Have you seen what they are doing? they are savagely beating themselves up and weeping. Is this religion Cutie?

I respect Mr. Mowaten and Mr. Nassrallah equally because they are Lebanese and not Iranians.

"Israel has no reason to threaten Lebanon" lol, are you that naive or just an israeli troll paid to lurk here?

@mowaten
What can one say, another E-X-C-E-L-L-E-N-T comment. I particularly enjoyed the part where you said "are you that naive or just an israeli troll paid to lurk here?"

Thank you for making our lives so much better.

but the Lebanese resistance booted out Israel, this is the main achievement for the majority of the Lebanese people... you see always you miss the main things, tiny thing.

the two iranian trolls just finished their rituals of tatbir and are back manning their terminals for more iranian propaganda.

Nasrallah's acrtions:
* 2 year boycott of the electoral session of Parliament demanding the coronation of Aoun, but really opposing Aoun
* Paralysis of Lebanese State Institutions.
* Program to destroy the Lebanese Republic under the National Pact as amended by Taif and create a new Hezbollah dominated state.

Conclusion: Nasrallah is a hypocrite, lives in a fact free reality and believes that the Lebanese people are as stupid as he thinks the Shiites are.

endowed you are well aware that Lebanon are at war with Israel right?

oh really ? do tell us more how your iranian filthy criminal militia is fighting the war with Israel.

Didn't your criminal leader send Israel a message through the russians telling them the South is the safest place on earth and let's keep it that way?

According to whom?
Gulf News outlets what a surprise.

Next thing will be Orient News claiming Assad is dead or on board a Russian ship?

Hey you turbanized piece of filth, shove your equation !

Nadim Qteish does a great job exposing this filthy terrorist.

Nasrallah is 100% iranian and an enemy of Lebanon. He spewed his hatred on KSA for 2 days and in 2 different speeches accusing it of bombing the funeral ceremony that allegedly killed 80 people in Yemen. The terrorist has no interest in the pain of the Lebanese. Not once did he mention the twin bombings in Tripoli that were carried out by his Syrian masters and resulted in more deaths and injuries than the recent bombing in Yemen.

What a pity...reading all your posts I often ask how low can you go...you always surprise me. Shame!!