Eurozone Turns to IMF for More Help in Debt Crisis 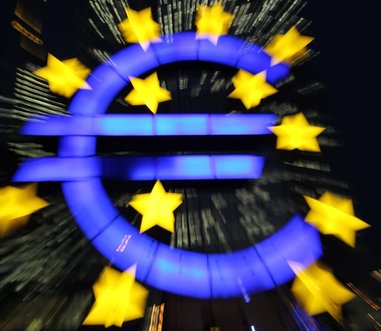 Eurozone finance ministers turned to the IMF for more help to keep the monetary union together late Tuesday after they missed their goal of boosting their own bailout fund to one trillion Euros.

With fears rising that Italy will need a bailout after its borrowing costs soared to record heights, ministers scrambled to tame a debt crisis threatening to break apart the 17-nation Eurozone.

The ministers gave the rescue fund, the 440-billion-euro European Financial Stability Facility (EFSF), new weapons as part of efforts to increase its firepower but they were unable to give it a new headline figure.

"We haven't lowered our ambitions but the conditions have changed, so it will probably not be one trillion Euros ($1.33 trillion) but less," Luxembourg Premier Jean-Claude Juncker, head of the group of Eurozone finance ministers, told reporters.

The EFSF has helped Ireland and Portugal but is deemed too small to save Italy and Spain if the crisis brings these countries to their knees.

The ministers agreed to allow the fund to guarantee 20-30 percent of potential losses incurred by investors who buy bonds of governments in financial trouble. They also decided to create co-investment funds to allow public and private investors to participate in the EFSF.

But EFSF chief Karl Regling said it was impossible to give a figure at this stage. "All of this is unpredictable, and market conditions will also change over time so that's why it's not possible to give one number," he said.

With Germany opposed to letting the European Central Bank act as a lender of last resort, the Eurozone is looking to the IMF for help.

"We agreed to rapidly explore an increase of the resources of the IMF through bilateral loans," Juncker said, adding that the goal would be to allow the IMF to match the firepower of the EFSF and cooperate more closely with it.

Raising the IMF's resources is a source of discord between Europe and its main international partners, most notably the Washington institution's paymaster, the United States, which says its resources are adequate.

"I think both European and non-European countries should be ready to increase resources through the IMF so that we have enough resources in total," said Dutch Finance Minister Jan Kees de Jager.

EU economic affairs commissioner Olli Rehn said the bilateral loans would be provided by Eurozone states at this stage and that there were no plans for the participation of a European institution.

Some ministers also suggested that the ECB could play a bigger role in the crisis through the IMF by providing loans to the institution, which would then give aid to Eurozone nations hit by the crisis.

"The EFSF alone will not be able to solve all those problems, we have to do it with the IMF and with the ECB," said Luxembourg Finance Minister Luc Frieden.

Belgium's Didier Reynders added: "The ECB is an independent institution, so we will put on the table some proposals and after that it is for the ECB to take the decision."

The aim is to circumvent a ban on the ECB providing direct aid to countries in trouble.

European leaders, who will hold a summit on December 8-9, are facing pleas from all corners of the world to contain a crisis that is also threatening to engulf Spain.

The Eurozone ministers agreed to finally release their share of an 8.0 billion euro bailout loan tranche that Greece needs by December 15 to avoid default.

But Italy and Spain, the third and fourth Eurozone economies, are now at the centre of the crisis.

The new Italian premier, Mario Monti, presented his reform plans to finance ministers but the European Commission warned that Rome needed to take more action and act faster to stem the crisis.

An audit report drafted after an EU mission to Rome said that "persistently high interest rates increase the risk of a self-fulfilling 'run' from Italy's sovereign debt."

In that event, "a liquidity crisis could then turn into a solvency crisis, whose repercussions for other large euro area countries would be very acute, given their exposure to the Italian economy."

Italy has debt of nearly 2.0 trillion Euros and must repay about 400 billion Euros ($532 billion) next year -- about the same amount the EU and IMF have offered for bailouts of Greece, Ireland and Portugal.