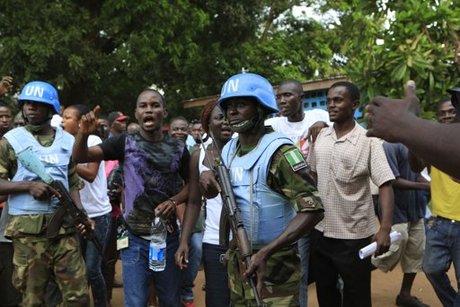 The aid worker -- the first U.S. national to be kidnapped in Niger -- was abducted Friday night in the town of Abalak, in the restive central Tahoua region.

"A search is underway. Our forces have been mobilized," Interior Minister Mohamed Bazoum told AFP by telephone.

The kidnappers are still in Niger, he added, after a security source told AFP earlier that they had already slipped across the border to Mali.

Bazoum said the abductors were "jihadists or bandits" seeking to sell the American to Islamist extremists operating in Mali.

He did not name the victim, but the interior ministry said he had been living in the area since 1992 for JEMED, an aid group working with the local Tuareg community.

The ministry said the kidnappers, who were armed and traveling in a Toyota, had burst into the man's home on Friday night around 9:00 pm.

They killed a bodyguard and a member of the national guard, before seizing the aid worker and heading west in the Toyota.

"These criminals are presently en route towards Mali," the ministry said in a statement, adding: "Our forces are on their trail."

A U.S. State Department spokesperson told AFP said they were aware of reports of the kidnapping of an American citizen but declined to comment further.

A local resident who knows the aid worker said he was "perfectly integrated with the population" having lived nearby since the 1990s, speaking the Tuaregs' Tamasheq language fluently as well as Fula and Arabic.

"We tried many times to make him leave the area as he was more exposed than ever, but he refused, saying he wasn't afraid," the resident said on condition of anonymity.

Northern Mali fell under the control of al-Qaida-linked jihadist groups in 2012. A French-led military intervention pushed them out, but swathes of the country remain out of government control and awash with armed groups.

The army has a heavy presence deployed along its northwestern frontier and Niamey has repeatedly called for a diplomatic solution to the Mali conflict.

Last week, 22 of Niger's soldiers were killed when armed men who had travelled from Mali launched an attack on a refugee camp in the town of Tazalit.

The Tahoua region, where Friday's kidnapping took place, neighbors Agadez where the U.S. has a military base which it uses to launch surveillance drones targeting jihadist groups.

A senior security source told AFP the kidnapping came as a surprise, as "the Americans do not pay ransoms."

In January 2011, two young French people were kidnapped from a restaurant in Niamey and were killed shortly afterwards during a rescue attempt.

The previous year, five employees of the French energy firm Areva were kidnapped by al-Qaida in the Islamic Magreb (AQIM) from a uranium mine in Arlit, north of the country.

Four men were freed in 2013 after the earlier release of the sole female hostage.