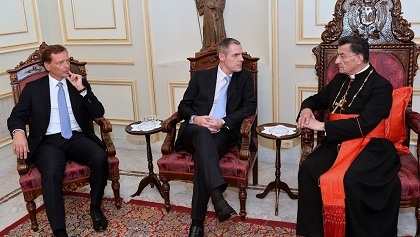 A French diplomat held talks Monday in Bkirki with Maronite Patriarch Beshara al-Rahi over the most important developments on the local and regional scenes, Lebanon's National News Agency reported.

After the talks, Jerome Bonnafont, the head of the Africa and Middle East department at the French foreign ministry, said he carried to the patriarch “a message of friendship from the French authorities.”

“Foreign Minister Jean-Marc Ayrault has asked me to head to Beirut to meet with Lebanese officials and discuss with them the idea of organizing an international meeting in support of Lebanon before the end of the year,” Bonnafont said.

The suggested meeting would discuss possible support from the international community to Lebanon “amid this dire situation that it is going through because of the refugee crisis and the paralysis of state institutions,” the French diplomat explained.

“We hope the work of institutions will be reactivated so that Lebanon can restore its normal life and move forward on the path of economic dynamism, confidence and safety,” he added.

Ayrault had held talks with al-Rahi in July during an official visit to Lebanon.

Last month, French President Francois Hollande told Prime Minister Tammam Salam during a New York meeting that France is preparing for a Paris meeting for the International Support Group for Lebanon that will be held in November in order to “take the necessary measures to help Lebanon at all levels.”

Aoun's chances have largely surged in recent days amid reports that Hariri has decided to shift his support from Franjieh to the FPM founder.