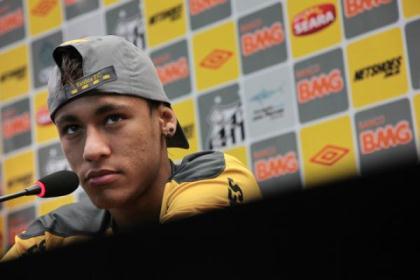 Brazil's 19-year-old superstar Neymar revealed on Wednesday that he has been ordered to pay 6,000 euros ($8,000) in damages for branding a referee a "thief" on his Twitter account.

He also announced that he would appeal against the decision, handed down by a court in Sao Paulo on Tuesday.

"It was never my intention to offend the referee," the Santos forward wrote on his personal website.

According to his lawyer, Neymar was not even the author of the message criticizing referee Sandro Meira Ricci that appeared on his Twitter account after Santos' 4-2 defeat against Victoria in August 2010.

The lawyer claimed the message was written by a friend of Neymar's who had access to the account.

Neymar said he deleted the message "immediately" after being informed of its existence.

"My mistake was not to have taken the necessary precautions," he said.

The judge decided that he should "pay for this oversight" and advised him to make sure "people cannot use his name for illicit means".

Neymar has been linked to some of Europe's most glamorous clubs, including Spanish giants Real Madrid, but the Brazil international recently extended his contract with Santos until 2014.