Schools to Shut as Delhi Chokes on Pollution 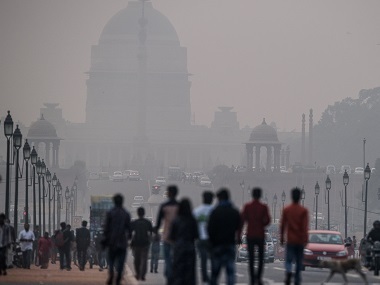 Some 1,800 primary schools in New Delhi were ordered to shut down Saturday as the Indian capital grapples with some of the worst pollution in recent years, an official said.

The decision would affect 900,000 children studying at schools run by the municipality in a city which has been enveloped by a thick smog since last weekend's Diwali festival celebrations.

"It has been decided to keep the municipal schools shut on Saturday because of smog in Delhi," Yogendra Mann, spokesman for the Municipal Corporation of Delhi, told AFP.

"The schools will operate as normal from Monday."

Most schools in India operate for six days a week, although Saturdays are a half-day.

It also suffers from atmospheric dust, the burning of crop stubble in farms around the city and pollution from open fires lit by the urban poor to keep warm in winter or to cook food.

The latest crisis began in the aftermath of the celebrations last Sunday night for Diwali when millions of firecrackers were set off, leaving the city blanketed in smog overnight.

The reading for pollutants in the atmosphere breached the 1,000 microgram mark for the first time in one neighborhood in south Delhi -- 10 times the World Health Organization's recommended level.

A new study by UNICEF says some 300 million children live with outdoor air so polluted it can cause serious physical damage, with the situation most acute in South Asia.

On Friday, India's environment ministry called a meeting with officials of neighboring states to discuss ways to combat pollution.

In Delhi's satellite city of Gurgaon, some schools remained closed on Friday, while others cancelled physical education classes and outdoor activities.