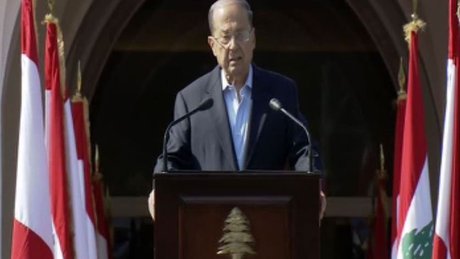 President Michel Aoun pledged Sunday that “corruption will be eradicated” during his presidential tenure, stressing that he will not allow any politician to violate the constitution as part of his vision for a “strong State.”

“Reaching the presidency is not our goal and the goal is to build a country that is strong through its national unity,” Aoun said before popular delegations that flocked to the Baabda Palace from all regions to congratulate him on his election, in scenes reminiscing the 1988-90 era when Aoun was in the palace as the head of a military government.

“A strong State is one built upon a constitution respected by all politicians and no one will be able to violate the constitution from now on,” Aoun promised.

“Today, we can stand proudly and defiantly before all people and countries because we have created our national unity and we will now begin the second journey, which is building the country,” the president said.

He vowed that Lebanon “will not be subordinate to any other country.”

“Non-politicized security forces must preserve the security of the Lebanese and they should be entrusted with implementing the laws, and these are not empty slogans,” Aoun went on to say.

Outlining his vision for the future of Lebanon, Aoun added: “We will exploit our natural resources and there are high hopes and a will among all Lebanese. That's why we have reached the presidency carrying developmental projects.”

“Corruption will be eradicated and the environment will become clean once again,” the president promised.

Remembering his 1990 ouster from the Baabda Palace at the hands of Syrian forces, Aoun said “the exit from Baabda was not humiliating.”

“We lost the battle but we were not crushed,” he stressed.

“Dear brothers and beloved ones, you are used to seeing me wearing another uniform, but our words and thoughts have not changed,” Aoun said.

“O great people of Lebanon, you were great and you have become greater,” Aoun added, echoing his signature slogan.

“We met before at this square during tough circumstances, but we were proud and vigorous. Today we remember our fallen martyrs and our dear soldiers who went missing and we cannot but remember them during any national occasion,” the president went on to say.

He noted that “a major international ploy” was behind his 1990 ouster from the Baabda Palace.

“It allowed non-Lebanese soldiers to invade our country... We did not fight the Lebanese and our objective was not to reach power. Our objective was to give war its real meaning for the sake of Lebanon's freedom, sovereignty and independence,” Aoun pointed out.

Aoun, 81, had long eyed the presidency and has long been a controversial figure in Lebanon, revered as a charismatic leader by his followers but loathed by his opponents.

A Maronite Christian, Aoun was born in the working-class Beirut suburb of Haret Hreik and, like many Lebanese from modest backgrounds, pursued a military career.

He rose through the ranks during Lebanon's 1975-1990 civil war to become the army's youngest-ever commander in chief in 1984.

Four years later, he was appointed head of one of two rival governments in war-torn Lebanon.

He launched the unsuccessful "war of liberation" against the Syrian army, which had entered Lebanon in 1976, and tried in vain to disarm the Christian Lebanese Forces militia led by his rival Samir Geagea.

The clashes between Aoun and Geagea's forces proved disastrous for Lebanon's Christians, who found themselves divided between the two leaders.

Aoun refused to sign the 1989 Taef agreement which brought the civil war to an end, arguing it cemented Syria's military presence and reduced the power of the presidency, the key governmental post reserved for Lebanon's Christians.

The agreement proceeded without his endorsement, and he was dismissed from his post as army chief with the ascension to the presidency of pro-Syrian Elias Hrawi.

On October 13, 1990, Aoun was forced by advancing Syrian army troops to seek refuge in the French embassy, heading to Paris the following year.

He would spend 15 years in exile there, founding the staunchly anti-Syrian Free Patriotic Movement in 1996.

In April 2005, Syria's army withdrew from Lebanon after massive protests sparked by the assassination of former prime minister Rafik Hariri.

Aoun returned to Beirut, scoring a surprise win in that summer's parliamentary elections -- 21 out of 128 seats -- after running a campaign decrying sectarianism and corruption.

But he made a dramatic about-face in 2006, aligning his FPM with Hizbullah, the powerful Shiite group that backs Syria's President Bashar Assad.

Aoun's shift to the Hizbullah-led camp earned him the contempt of Rafik Hariri's son, Saad.

Ironically, it was Hariri's endorsement 10 years later that finally secured Aoun the presidency.

Aoun had the backing of his ally Hizbullah since 2015, and scored the endorsement of rival candidate Geagea in early 2016.

This was many people's worst nightmare to see General. Aoun stand on that balcony, like it or not he is the President now get used to it.

We are definitely counting on him to put you and your likes down. There will not be a place for extremists and terrorists in this Lebanon. You can always go dig your grave with your brethren in Mosul who are giving out their final gasps.

does that include your hezbollah? or is it not considered extremist?

thanks mowaten for the clarification.

I actually cried watching his address. For the first time in my life I felt we have a real president who is pro shia and pro iran.

in order to do that, you first have to dissolve the fpm and put them in jail. Will you be able to imprison your son in law?

People think that since Syria left Lebanon we have gained independence. Lest we forget that the same Syrian stooges are in place running the same "Syrian taught" policies and we still expect to get different results? we will never learn. At any rate we can always depend on our leaders and Gods to help keep us in the Sty that we have become accustomed to.

Aoun had to call out the military to machine-gun thousands of demonstrators calling for the Constitution to be put to a popular vote, the first time this would have happened. He said of the fatalities, "This is the price of obeying the Constitution." Demonstrators were demanding the ouster of Article 24, which reserves half of the seats in Parliament to Christians. Many of the protesters' signs asked "Why would we vote to take away our right to vote?"

How about we start with 24hrs electricity and make every citizen pay the electric bill in sabra, chattila, dahyeh,nahr bared and saida.