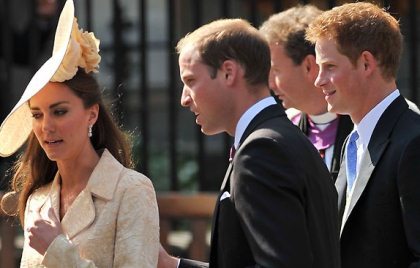 Prince William, his wife Catherine and his brother Prince Harry will promote British athletes in the run-up to the 2012 London Olympics, their office announced on Thursday.

The trio said they were "honored" to become ambassadors for Team GB and ParalympicsGB, and will play an active role encouraging the public to support the teams.

They are likely to visit the British competitors in the months leading up to the start of the Games in July and the Paralympics a month later.

They began their ambassadorial role with a message of support for a newly launched program designed to offer aspiring athletes and coaches a first-hand understanding of the Olympic environment.

William, the second in line to the throne, said: "Catherine, Harry and I are honored to be ambassadors for Team GB and ParalympicsGB.

"London hosting the 2012 Olympic and Paralympic Games will inspire so many people -- particularly the young -- to be the best they can be.

"We are hugely looking forward to this incredible sporting competition, but are also looking beyond next summer's Games to the springboard it will provide for future success and excellence.

"The athletes and coaches taking part in the Team GB Ambition Program are part of that future success -- potential medal-winners and sources of inspiration to come.

"We hope they enjoy the experience of London 2012 to the full, and learn from it how to become successful British Olympians of the future."

There was no indication however whether William and Harry intend to make a visit to support the preparations of their cousin, Zara Phillips, who is bidding to take part in the showjumping competition at the Olympics.