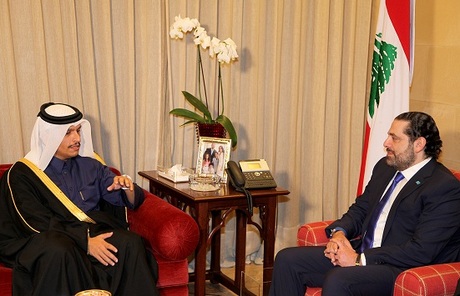 “We congratulate the Lebanese people on the election of President Michel Aoun and we hope that brave decision that ended the political vacuum crisis in Lebanon will be followed by the formation of a government led by PM-designate Saad Hariri, so that life can return to normal and the institutions can work again in a better way,” the Qatari FM said after meeting Hariri at the Center House.

“We will continue our support for the brothers in Lebanon and the Lebanese government and we wish the PM-designate success in his efforts these days. We are very confident that a strong government will be formed and that it will support the Lebanese people and all Arab peoples,” he added.

Hariri for his part said the latest visits to Lebanon by Gulf officials “indicate that the Gulf is showing openness to restoring ties with Lebanon.”

Asked about the steps that his government will do to mend ties with the Gulf, Hariri said: “We will definitely turn the page... The president (Michel Aoun) is keen on ties with all Arab countries, especially the Gulf states, and God willing he will make visits to these countries and I will too.”

The Qatari minister's visit to Lebanon comes a few days after a similar one by a senior Saudi delegation led by Mecca Governor Prince Khaled al-Faisal.

Aoun's election as president after two and a half years of presidential void and Hariri's designation as PM have raised hopes that Lebanon can begin tackling challenges including a stagnant economy, a moribund political class and the influx of more than a million Syrian refugees.

money money were back in the money...