Year On, Tunisia Honors Guards Killed in IS Bombing 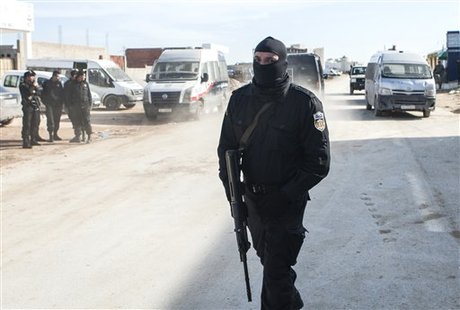 Tunisia paid tribute Thursday to 12 presidential security guards killed in a suicide blast in the heart of the capital one year ago that was claimed by the Islamic State group.

President Beji Caid Essebsi unveiled a memorial, showing three special agents with their weapons, inside the barracks of the presidential security service in Gammarth, a suburb of Tunis.

"We continue to convey our condolences to the families of the victims and tell them that the state should live up to its responsibilities towards their children, children of the nation," he told reporters at the scene.

"The terrorism we are confronting is not part of Tunisia's culture," he said as wreaths were laid in front of sculptures of the faces of the 12 victims, with their families in attendance.

Twelve gunshots were fired in the air and the president lit two bowls with a flame which had been brought to the barracks from the scene of the November 24, 2015 bomb attack, around 20 kilometers (12 miles) away.

The deadly attack on the bus transporting the guards struck a few hundred meters (yards) from the interior ministry in central Tunis.

IS claimed the attack as well as bombings earlier the same year at the Bardo National Museum in Tunis and a beach resort in Sousse that killed 59 foreign tourists and a Tunisian guard.

A state of emergency has been in force across Tunisia since the bus bombing.