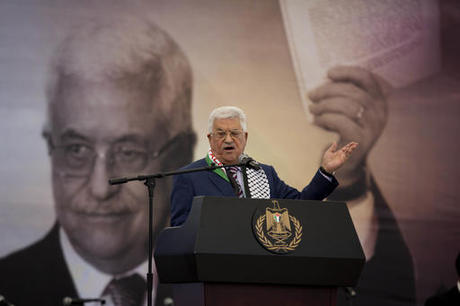 Key dates in the life of Mahmoud Abbas, president of the Palestinian Authority since 2005:

- March 26, 1935: Born in Safed in the Galilee, which was then in Palestine, today in northern Israel. Goes into exile in Syria in 1948 when Israel is founded. Studies law at Damascus university.

- 1959: Living in the Gulf, Abbas with Yasser Arafat founds Fatah, a secular movement that carries out armed operations against Israel from 1965, becoming the main component of the Palestine Liberation Organization (PLO), created on May 28, 1964. He follows the PLO from Beirut to Tunis, entering its executive committee in 1983.

- November 15, 1988: On his initiative, the Palestine National Council, the parliament in exile, recognizes de facto the existence of Israel, rejects terrorism and proclaims an independent Palestinian state. From 1974, Abbas becomes the first high-ranking Palestinian to initiate contacts with left-wing Israeli figures.

- September 13, 1993: Abbas signs the Oslo accords on Palestinian autonomy in Washington with Israeli foreign minister Shimon Peres. Abbas was the chief architect of the accords on the Palestinian side.

- September 9, 1994: Returning to Palestinian territory two months after Arafat, Abbas seeks to visit his birthplace but delays his visit after hostile Israeli demonstrations.

- March 19, 2003: Accepts Arafat's proposal to become prime minister, a post created under international pressure in the midst of the second Palestinian intifada. Stands down in September after deep differences with Arafat.

- January 9, 2005: Elected president of the Palestinian Authority, having been propelled to the PLO leadership after Arafat died on November 11, 2004. Islamists boycott the vote. His term, which expired in 2009, has since been extended because Palestinian divisions have prevented new elections.

It is the beginning of a bloody trial of strength for Abbas with Hamas, which leads the government from March 2006 to June 2007 before taking over the Gaza Strip, confining Fatah to the West Bank.

- November 29, 2012: Faced with an impasse in the peace process, Abbas secures for Palestine non-member observer status at the United Nations, where its flag is hoisted for the first time in 2015. Several European parliaments recognize Palestine.

Hope not, better the devil you know than the one you don't know.