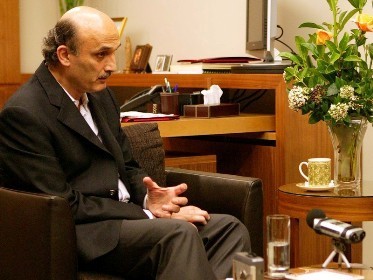 Lebanese Forces leader Samir Geagea announced Tuesday that “the wrangling over shares and ministerial portfolios is a veiled attempt to target the LF-Free Patriotic Movement alliance.”

“Some parties do not want a new presidential tenure, but rather a continuation of the previous presidential tenures, especially those we witnessed during the (Syrian) tutelage era,” Geagea said in an interview with the al-Markazia news agency.

“We will spare no effort to back this tenure so that it truly becomes a new tenure,” Geagea added.

“We realized from the very first moment that the issue goes beyond the distribution of portfolios... but the State will only rise according to the Constitution, which is very clear in this regard,” the LF leader went on to say, noting that some parties “are confronting the new presidential tenure's policies through obstruction.”

And hoping to “expand the Baabda-Maarab-Center House axis to include Ain el-Tineh, Dahieh and the Progressive Socialist Party,” Geagea noted that “it is no longer acceptable or possible to maintain the rules that governed the political game between 1990 and 2005.”

He also denied that there is an intention to “eliminate or exclude any political group.”

“Anyone is welcome to join the era of the constitution-governed State,” Geagea said.

The LF leader also said that the new cabinet will likely be formed soon, noting that “wasting time is not in the dictionary of” President Michel Aoun and Prime Minister-designate Saad Hariri.

“Should no solutions loom on the horizon, the constitutional solution exists, and there is an inclination to form a constitutional government,” Geagea added, hinting that Aoun and Hariri might impose a cabinet line-up on the political parties.

Speaker Nabih Berri, who is negotiating on behalf of the Hizbullah-led March 8 camp, is clinging to the finance and public works portfolios while also insisting that the Marada Movement must get a key portfolio.

all the shias have froggy eyes