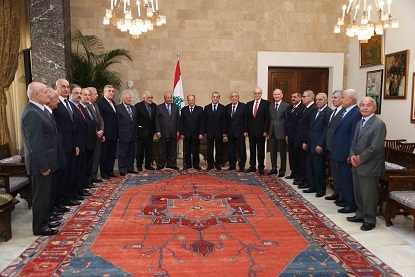 During meetings with his visitors at the Baabda Palace, Aoun stressed “the importance of immunizing national unity,” describing it as “the main deterrent against those seeking to undermine domestic stability,” state-run National News Agency reported.

He also called on all citizens to “cooperate with the State and its institutions to resolve the pending issues and contribute to combating corruption.”

“The success of any person or institution is a success for the entire country, because our higher objective is to build a just, strong and capable State,” Aoun added.

“This is a national workshop that can fit everyone and no one will be excluded from it,” the president went on to say.

Aoun's election after two and a half years of presidential void and Saad Hariri's appointment as premier-designate have raised hopes that Lebanon can begin tackling challenges including a stagnant economy, a moribund political class and the influx of more than a million Syrian refugees.

Well done president 3oun for stating that lets hope you surprise us all and actually follow through with this issue. The Leb millitary years ago used to have a training program to teach soldiers about unity and its importance sadly it has been side tracked to appease kizb in Lebanon so if the president returns this program to the masses then I take my hat off to him. I have never been a supporter of the president and I am willing to eat my words if he does indeed make a difference in Lebanon as he has the power and the catalyst to stand up to Syria/Iran and fight for Lebanon instead of the past stooges we have had since Franjiyi for Syria.