At Least 25 Dead in Blast at Cairo Church 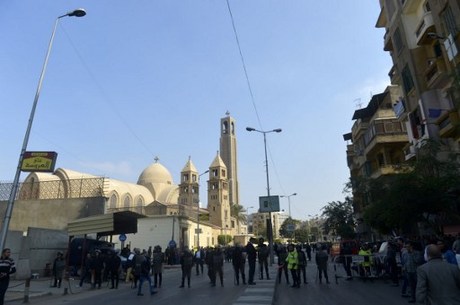 A bomb blast tore through a church near Cairo's Coptic cathedral during a service Sunday, killing at least 25 people in the deadliest attack in recent memory on Egypt's Christian minority.

There was no immediate claim of responsibility for the bombing but Coptic Christians, who make up about 10 percent of Egypt's population, have been previously targeted in jihadist attacks.

At least 31 people were also wounded in the blast, the health ministry said, as the attack drew condemnation from political and religious leaders and led President Abdel Fattah al-Sisi to declare three days of national mourning.

The bombing hit around 10:00 am at the Saint Peter and Saint Paul Church, which is adjacent to Saint Mark's Cathedral, the seat of the Coptic pope Tawadros II.

A bomb made of 12 kilos of TNT appeared to have been behind the explosion, security officials said.

The blast shattered the church's glass windows and scattered pews through the main prayer hall, scorching its marble pillars.

Blood stains could be seen on the floor, where shoes and other belongings lay scattered.

"I was leaving the church and then I heard a loud explosion and there was a lot of smoke and people started running and screaming," Jackline Abdel Shahid, one of the survivors of the blast, told AFP at the scene.

"The ambulances started coming, and they kept bringing out body parts. The floor was covered in blood, and the whole church was stained with blood, broken glass everywhere, everyone screaming, torn clothes," she said.

Gebrail Ebeid, who has been headed to services when the bombing took place, accused Egypt's government of not doing enough to protect the Christian community.

"This is the government's responsibility. The explosion happened inside the church," said Ebeid.

"Where were the security forces? They're filling the streets now, but it's too late," he said.

Several dozen people gathered outside to protest after the bombing, chanting for the resignation of Egypt's interior minister. They briefly scuffled with police as they tried to push through the cordon.

It was the worst attack on the Coptic Christian community since a 2011 suicide bombing killed more than 20 worshipers outside a church in the coastal city of Alexandria.

"This latest attack should be a wake-up call to the authorities that their actions to prevent attacks on Coptic Christians have long been inadequate," Amnesty International said in a statement.

Interior Minister Magdy Abdel Ghaffar rushed to the area after the blast and Prime Minister Sherif Ismail called on security services to quickly find those responsible.

"The nation's Muslim and Christian citizens stand together against this black terrorism," Ismail said in the statement.

Sisi condemned what he described as "the abhorrent terrorist attack", saying in a statement: "Egypt will only emerge stronger and more unified from these events."

The president also called the pope to offer his condolences.

The church that was targeted "is deeply loved by many Coptic faithful in Cairo and it has a regular parish presence," said Bishop Angaelos, the General Bishop for the Coptic Church in Britain.

He said services had been held in the church on Sunday morning, while Saint Mark's Cathedral was being renovated.

"It's an easier target because its entrance is outside the precincts" of the cathedral.

Copts have faced persecution and discrimination dating back to the 30-year rule of Hosni Mubarak, who was toppled by a popular uprising in 2011.

Dozens have been killed in recent years in sectarian attacks and clashes throughout Egypt.

In April 2013, two people died in clashes with local residents outside Saint Mark's Cathedral, the spiritual heart of the largest Christian minority in the Middle East.

Islamists in August 2013 attacked churches and homes of Copts in retaliation for the dispersal by security forces of Cairo protest camps of supporters of Mohamed Morsi, the Islamist president deposed by then-army chief Sisi.

Enraged by the crackdown in which hundreds died, mobs lashed out at Copts in the Upper Egypt province of Minya, accusing them of backing the military.

More than 40 churches were attacked nationwide, with most attacks in Minya and Assiut, Human Rights Watch said at the time.

Security forces have been the main target of attacks following Morsi's ouster.

Most of the attacks are conducted in the Sinai Peninsula by a branch of the Islamic State group, although militants have also targeted security forces and government officials in Cairo.

On Friday, six people died in a bombing next to a police checkpoint in the Talibiya area of Cairo shortly before Muslim weekly prayers when the streets are mostly empty.

Sisi and Assad are the same kind of sub-humans. Sisi using the same tactics as Assad.... scare the minorities, bomb them and justify your war against anyone who is against you.

good comment @Southern and very relevant.... not unusual for you.

This would've been Lebanon destiny everyday, had your so called Syrian rebels overthrown Assad.

Sorry Mystic the only ones who threatened to blow up churches in Lebanon was the so called Free Sunnis of Baalbek Brigades, as Hezbollah front. Also the Samaha-Mamlouk plot was planing some of it's bombing attacks during Patriarch Beshara al-Rahi's visit to Akkar so they can use these attack to blame Assad's opposition.

Assad is a dictator, but There is not a SINGLE Syrian Christian that would agree with you. Assad has stood against Sunni bigots to fight for Christian rights.

Terrorist, yet that opposition Minister Riad Hijab was Assads former Prime minister until he left office himself.

He was a sunni in the highest post after the President
So drop your salafi lies.

Sorry bigjohn Assad like his father will support, foster and encourage any bigot who stand with him regardless of their sect or ideology and will arrest, torture and murder anyone who dares criticize him regardless of their sect and ideology. Saddam is another one forged from that same mold, his apologists insist that he stood against Shi3a bigots and that he defended Christian rights. It's what dictators do.

I have valuable intel pointing at you troll confirming you're a total idiot.

Southy... are you a complete retard? Do you think someone here supports isis? They are no better than Ebola!

Morsi's followers consider Iran their first enemy, as the Israelis!

how many of Morsi's followers do you know?

Egypt and the ARAB world needs someone like NASSER who is not corrupt. These massacres NEVER happened when Nasser was the ruler.

"NASSER who is not corrupt" yup bigjohn you're right, NASSER is not corrupt.. of course it's hard to stay corrupt while in a dust like state although when he was still in a more solid state NASSER was plenty corrupt. Also like Ba'athism, Ikhwanism, Communism, Khomeinism, the Qawmi Souri, Arab nationalism, Islamic Khalifa and like ideologies he did not believe in national borders.

May God let the lights of His Power perpetually shine upon the innocent souls of those who perished and work in them the good purpose of His perfect Will.

It's that same hateful ideology that is taught by hateful people. It should be sent back into the dark ages where it belongs

Sad day indeed for all these innocent victims of religious hatred. Arabs live purely to kill for their Gods nowadays and we laugh at the ancient tribes that did ridiculous sacrificial things whats the difference?

religions were invented to control people through fear...

and you is always about harassing people to try to feel superior but rarely commenting on the article, lack of neurones i suppose....

yeah we know your poor hezbi rhetoric, borrowed from the zionists: you are the elected people, the divine ones... all the others are worthless...

nothing new under the sun of fanaticism... always the same speech going on for decades.

your imagination is very limited as your neurones are....

The supporters of the Iranian militia in Lebanon hate it when someone else in called martyrs especially Christians, that's why they vote the above comment down. They have cornered the market for the words martyrs and resistance which is ironic they are neither.

Lol, Salafists drool over things like this, but their apologists blame Sisi? Denial or blatant lying?

Lol, Salafists drool over things like this, but their apologists blame Sisi? Denial or blatant lying?

I respect Mr. Mega Habib coz he knows when Salafists drool.

A good Islamist is a dead Islamist, including their females.

Islamists must be exterminated from the face of the earth.

This incldus the Grand Mufti of Saudi Arabia.