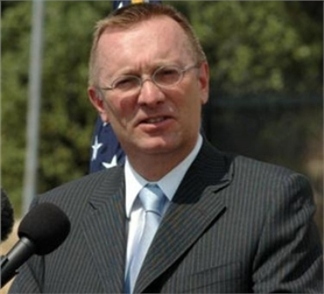 A senior U.S. official said on Sunday that the world is looking for peaceful ways to end "killing and brutality" in Syria, accusing Iran of supporting the murder of Syrian people.

"While the goal of all us is to find ways to stop the killing and brutality, we are looking for peaceful ways to do so," Jeffrey Feltman, assistant secretary of state for near eastern affairs, told reporters in Amman.

"We think it is appalling what is happening in Syria, that you have (president) Bashar al-Assad basically driving the country to violence and sectarian strife by the actions he is taking."

More than 4,000 have died in the Syrian regime's continuing crackdown on dissent and protests which erupted in mid-March, according to the United Nations.

"We believe that in full light of monitors and media, the security services reporting to Assad and his clique would not be able to operate the way they are operating now," said Feltman.

"By allowing the monitors in, by allowing the media in, that's a peaceful way of trying to stop this sustained cycle of violence that Assad seems committed to turning Syria into."

An Arab League ministerial committee late on Saturday gave Damascus until Sunday to allow an observer mission into the country and thereby avoid further sanctions.

A senior Qatari official said Damascus had asked for "new clarifications and further amendments to be made to the protocol which was proposed" to cover the deployment of the observer mission. But the Arab ministers had "refused."

"Iran is actively engaged in trying to help Assad put down peaceful protests inside Syria. I cannot imagine that this is good for the long-term Iranian-Syrian relationship, and that is just fine with us."

Tehran has expressed some criticism of Syria's violent crackdown on protesters, but has also accused the United States and Israel of stirring up trouble there and opposed the Arab League's suspension of Syria.

What a hypocrite. How about a peaceful way to get israel to stop killing, oppressing, and ravaging the palestinians? And to stop trying to bully their neighbours and return stolen land. And maybe they can also stop ethnic cleansing. But a hypocrite with an agenda will never understand.

do you blame him? Everyone has an agenda, even you, ya arzz. Which is the worst of 2 evils?

The only solution he seeks for Syria is to keep funding insurgents who appear to be ignorant to the fact they are being manipulated at evry turn by the US and EU. They are crippling the principles of pan-Arabism and leaving the region open to the Israelis.

there's no such thing as pan-arabism.

March 14, did you read this? I mean, can you find someone to explain to you what this means? Have you started to feel something thick and long down there and pushing upwards yet? Do you know how to translate m3alla2in bi 7ibal al hawa to English? How about to Hebrew that you so well understand? Here it is again in case you missed it before: m3alla2in bi 7ibal al hawa

anyone who supports March 8 has a militia mentality. If you disagree with them, you will die.