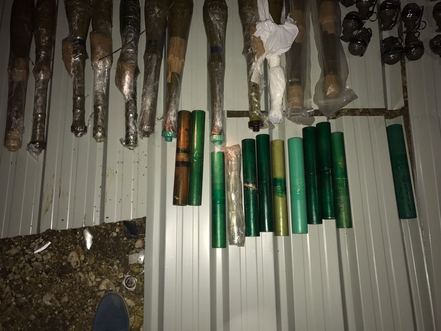 The Army Intelligence Directorate obtained, after thorough monitoring, some “accurate and credible” information that terror cells are taking action in the northern city of Tripoli according to instructions delivered to them from Islamist fugitive Shadi al-Mawalai, who is taking refuge in the southern Palestinian refugee camp of Ain el-Hilweh, As Safir daily reported Saturday.

“The cell was preparing to stage terror acts inside Lebanon,” a well-informed source told the daily on condition of anonymity.

“At 11:00 p.m. on Thursday, upper class Army Intelligence Units together with military units in Tripoli, were able to bust a 3-member terror cell. The militants were taken to the Defense Ministry in Yarzeh for interrogation. They made initial confessions that made the Directorate expand the circle of raids and tracking, and succeeded at busting a second cell composed of two terrorists bringing the total to five,” added the source.

“The detainees in custody were identified with their initials as Lebanese R.M., A.S., B.S., A.S and Palestinian W.A. They have all confessed to having links to al-Mawlawi who supplies them with information and instructions, while hiding in Ain el-Hilweh, the latest plan was to carry out attacks during the holiday season,” said the source.

The army seized “a ready for use explosive belt provided with explosive substances capable of causing mass killing in case the terrorist tried to sneak through a crowd, in addition to guns with silencers, rocket-propelled grenades and large amounts of weapons and ammunition.”

“The cell's initial confessions showed that it was planning to carry out the attack by first throwing rocket-propelled grenades and hand grenades to be followed by heavy gunfire .. on a final stage when people gather to save the wounded, a suicide bomber would blow himself up among the crowd,” he added.

However the source did not disclose the attackers' targets, and only hinted saying: “Aren't we in a festive season starting with the birth anniversary of Prophet Mohammed, then the birth of Jesus Christ down to the New Year's celebrations? Ain't these celebrated in mosques and churches, public places, cafes and hotels? Hasn't the southern suburb of Beirut been one of the terrorist's targets?”

The source went to say, “there are significant security measures, visible and invisible, to protect all places. There is no cause for panic or fear. Citizens are required to continue their festive nightlife program without any modification.”

Terrorist wanted to offer to his BGF IcENorMan a firework

Happy New Year to all Lebanese honest patriots who love Lebanon and do not obey to orders from external countries.