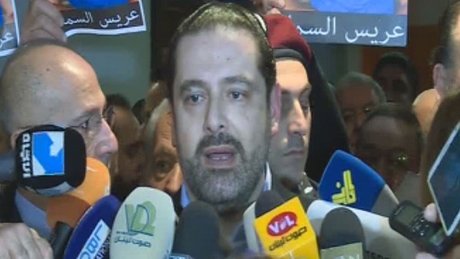 Prime Minister Saad Hariri announced Monday that Lebanese authorities are following up with Turkey on the issue of the attacker who carried out the Istanbul nightclub massacre and killed 39 people including three Lebanese citizens.

“We are following up with the Turkish government on the issue of the criminal who carried out the crime,” Hariri told reporters at Beirut's airport where he received the plane that carried the bodies of the Lebanese victims and the wounded from Istanbul.

“We came today to the airport to represent President Michel Aoun and Speaker Nabih Berri and to receive the martyrs and the wounded, and we as a State have a responsibility to shoulder before our people,” Hariri said.

“We will stand by the families of the victims in all the steps,” he added.

The premier noted that terrorism is “targeting us all” and “targeting the good people who love life and who want to live,” stressing that “terrorism has no religion.”

“We will fight it with the strongest thing we have, which is our national unity,” Hariri added.

“In my name and in the name of President Michel Aoun and Speaker Nabih Berri I offer my condolences to the Lebanese people over this tragedy,” the PM went on to say.

“This day is the day of the martyrs and the wounded,” Hariri said, calling on everyone to “pray for the victims” and to “remain united.”

The jihadist Islamic State group has claimed responsibility for the attack, saying it was in response to Turkey's military intervention against the jihadists in war-ravaged Syria where Turkish troops are pressing on with a four-month incursion to oust IS jihadists from the border area.

Turkish police arrested eight suspects on Monday but the attacker remained on the run.

Hurriyet daily said investigators believe the gunman may be from the Central Asian states of Kyrgyzstan or Uzbekistan.

The attacker may be linked to the same cell that in June carried out a triple suicide bombing and gun attack at Istanbul's Ataturk airport blamed on IS that left 47 people dead, the paper added.

Terrible tragedy in Turkey, but refreshing that Lebanon responds like a real government now, not some militia run state.

we are all very happy that you feel "refreshed"

Agreed. RIP.
We need to rise as a single nation and bring our servicemen too back home. Their families are struggling as well.
Those fighting and dying outside Lebanon need to be forced to come back home as they will attract those fanatics to retaliate inside our country.

Those fighting outside Lebanon should stay outside, and equire Syrian, Iranian or Russian citizenship. We don't need war criminal back in Lebanon.

Fully agree...they would be happier outside Lebanon and can keep doing wars as much as they like.

where do you live tony? lol

you never miss a chance to tell us how much of a "proud american" you are, yet your country is full of war criminals who committed the worst crimes all over the planet, from viet nam to libya and every other country there was a dollar to be made for uncle sam and his buddies.
but you call them heroes, dont you?

Seems a spirit has come down on PM Hariri, he's become a much more competent statesman! Kudos to him, may he keep up same way. Perhaps President Aoun gave him a healthy smack.