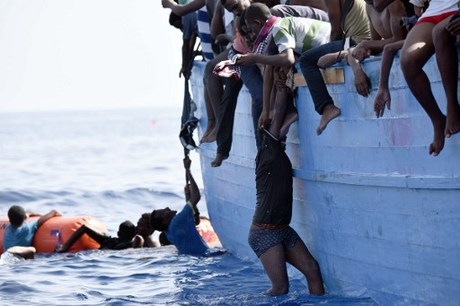 The EU should meet soon with Libyan authorities to try to avert the risk of an "unprecedented" migrant flow through the central Mediterranean, Maltese Prime Minister Joseph Muscat warned Thursday.

After the European Union launched naval operation "Sophia" in 2015 to crack down on traffickers sending African migrants on rickety boats from Libya to Europe, "it is time for a second step," Muscat told reporters.

European navy ships "need to go in the territorial waters of Libya, obviously with the permission of Libya," said the premier whose country assumed the rotating six-month EU presidency this month.

The EU wants cooperation with a U.N.-backed Libyan unity government seeking to end years of lawlessness following the 2011 overthrow of Moammar Gadhafi, but it is locked in a power struggle with a rival administration in eastern Libya.

Muscat said that "the EU should be ready to engage with Libya," or face the risk of "an unprecedented" flow of migrants when the warmer weather comes in the spring.

"We will need to do it now," he said. "We need to give a political signal to scuttle the business model of the criminal racket."

Malta wants a repeat of the last year's aid-for-cooperation deal with Turkey that has dramatically slowed the number of migrants landing in Greece, which had been the main entry point for Europe.

Now trafficking on the central Mediterranean route is picking up sharply with more than 180,000 migrants landing in Italy last year, compared with a previous annual record of 170,100 in 2014.

The influx of more than one million asylum seekers -- mostly from war-torn Syria -- into the European Union in 2015 triggered the worst refugee and migrant crisis on the continent since World War II.

The EU launched Operation Sophia after hundreds of migrants died when their makeshift boats sank off southern Italy.

It currently comprises five vessels and three helicopters charged with intercepting smugglers' boats and destroying them but it is confined to international waters.

The Sophia vessels, which patrol up to 12 nautical miles off the Libyan coast, have destroyed hundreds of dinghies and wooden boats to stop smugglers reusing them.