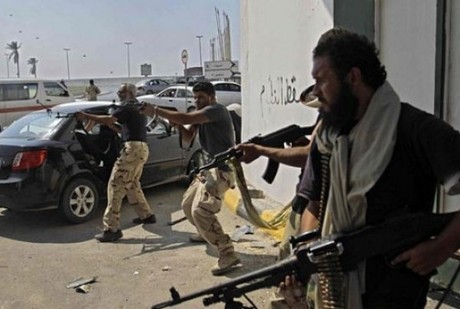 Forces loyal to Libyan Field Marshal Khalifa Haftar battling jihadists around second city Benghazi said Wednesday they had taken one of the last remaining strongholds of the militants.

Two other LNA officials confirmed to AFP that Qanfouda, the scene of fierce fighting since June, had fallen from jihadist hands.

One of the officials said there were still militants from the Al-Qaeda-linked Ansar Al-Sharia group present near Qanfouda.

Meanwhile a car exploded late Wednesday in the centre of Benghazi, leaving six wounded including five civilians and a soldier, according to the city's Al-Jala hospital.

A security service source told AFP that it was not yet known whether the explosion was due to a suicide bombing or a car bomb, adding that the attack was likely aimed at a military convoy travelling along the road.

Libya's unrest since the 2011 ousting of strongman Moamer Kadhafi allowed extremist organisations including the Islamic State group to gain a foothold in the country.

For nearly three years Benghazi has been the scene of bloody attacks and fighting between these groups and forces loyal to Haftar.

The country has fallen into chaos, with the UN-backed Government of National Accord based in Tripoli failing to assert its authority over the country.

The GNA is opposed by a rival administration that is based in Libya's far east and backed by military strongman Haftar.

Haftar has managed to retake a large part of the eastern coastal city from jihadists since Benghazi came under their control in 2014.

But jihadists still control the central Benghazi districts of Al-Saberi and Souq al-Hout, according to the LNA.

These jihadist groups include the Revolutionary Shura Council of Benghazi, an alliance of Islamist militias that includes the Al-Qaeda-linked Ansar Al-Sharia.