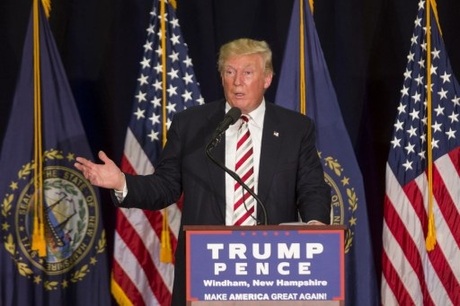 President Donald Trump on Wednesday dismissed talk of a Russian connection as "non-sense," two days after the resignation of his national security adviser Michael Flynn renewed questions about Moscow interference in U.S. politics.

"This Russian connection non-sense is merely an attempt to cover-up the many mistakes made in Hillary Clinton's losing campaign," Trump said in an early morning post on Twitter.

The New York Times on Tuesday reported that US intelligence agents intercepted calls showing that members of Trump's campaign had repeated contacts with top Russian intelligence officials in the year preceding the November 8 presidential election.

U.S. intelligence agencies concluded in January that Russia had intervened in the electoral process at least in part to help Republican property tycoon Trump win.

In a barrage of tweets, Trump took fresh aim at some of the media Wednesday, while praising the conservative Fox television network.

"The fake news media is going crazy with their conspiracy theories and blind hatred. @MSNBC & @CNN are unwatchable. @foxandfriends is great!" he tweeted.

Trump also accused the U.S. intelligence services of having leaked information, directly pointing the finger at the National Security Agency and the Federal Bureau of Investigation.

"Information is being illegally given to the failing @nytimes & @washington post by the intelligence community (NSA and FBI?) Just like Russia," Trump wrote.

He lobbed a hardball at his Democratic predecessor Barack Obama, writing "Crimea was TAKEN by Russia during the Obama Administration. Was Obama too soft on Russia?"

Sarcastic and disrespectful against its own Nation's Agencies and most respectful newspapers! Trump is an insane Sociopath.