Reports: Nasrallah Advises Israel to 'Count to Million' before Thinking of New War on Lebanon 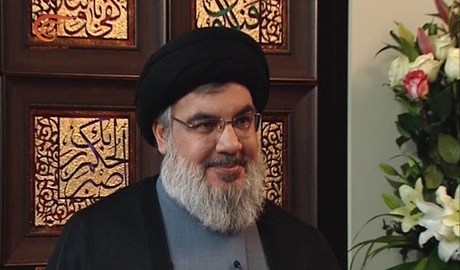 Hizbullah chief Sayyed Hassan Nasrallah on Monday advised Israel anew against waging any war on Lebanon, warning that his group will not abide by any “red lines” in any future confrontation, media reports said.

“Israel must 'count to one million' before waging any war on Lebanon and we're prepared for any threat,” the reports quoted Nasrallah as telling Iran's state television.

“We are not advocates of war. We are in the defense position,” Hizbullah's chief reportedly noted.

“In the face of Israel's threats to destroy Lebanon's infrastructure, we will not abide by red lines, especially regarding Haifa's ammonia and the nuclear reactor in Dimona. Hizbullah possesses the full courage for this,” added Nasrallah.

Israel's Minister of Intelligence Yisrael Katz had on Thursday warned that "if Nasrallah dares to fire at the Israel homefront or at its national infrastructure, all of Lebanon will be hit," in response to threats launched earlier in the day by Nasrallah.

Nasrallah advised Israel Thursday to "dismantle the Dimona nuclear reactor," warning that it poses a threat to Israel's existence if hit by his group's missiles.

A 2006 war between Israel and Hizbullah killed about 1,200 Lebanese, mostly civilians, and around 160 Israelis mostly soldiers before ending in a United Nations-brokered cease-fire.

The Israel-Lebanon border has remained mostly quiet since the 2006 war but there have been sporadic outbursts of violence.

Its sweet to see this hidden sheik advice and try to be friend with his buddies in tel Aviv in public. And since he is telling them the dimona plant is harmful for the Israeli, he should be made friend of the year

it's sweet to see all the israeli agents in disguise lamenting and raging over Nasrallah's words. Are you guys still Arabs and Lebanese patriots today?

i don't think anybody needs their Lebanese identity questioned and certainly not by a known paid iranian mouthpiece.

It's as sweet as ignorance sometimes !!!!

and then says " Had I Known", I would have asked them to count to one trillion.

More empty and arrogant threats that will only lead to him later regretting every single one of his words.

..says the terrorist leader who himself admitted that he grossly miscalculated what his kidnappings last time around would lead to for the lebanese people...do not try to advice other people and instead talk of how many million he will count to himself before embarking on adventures like that again...

the resistance leader is doing you a favour, he is advising you, besides he doesn't like to kill civilians as you do because is an act of cowardness... now start to pack your belonging, zionist scum.

btw, durring 2006 war, most victims on the Lebanese side were civilians while most of the Israelis were troops... if the resistence wants to hit civilian targets, it would have eliminate many of you...thats why the advising of the removal of your chemical and nuclear sites.

He is not advicing me, as you probably now. Does every lebanese who is against your partys mad obsession for war have to be Israeli, or Israeli agents? I could not care less for Israel, and in fact I symphatize with the palestinians. But as in your case I dont believe that Hamas, Jihad, PLO will achieve any dreams with their war games.

bla bla bla... we are still awaiting the rockets to fall on haifa wa baad haifa as promised in 2006...

and look to those proud hezbi supporters, proud that one single party decides of the fate of an entire nation.... and they say they respect the state... pityful hypocrits