Turkey-Backed Syria Rebels Announce Capture of Al-Bab from IS 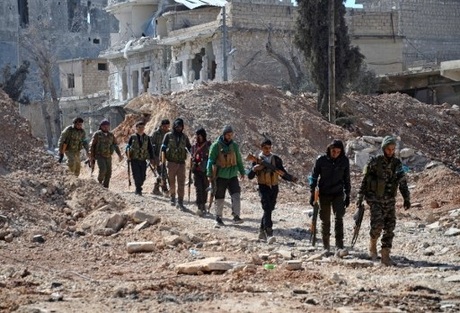 Turkish-backed Syrian rebels said Thursday they had fully captured the town of Al-Bab from the Islamic State group, marking a key defeat for the jihadists after weeks of heavy fighting.

As Ankara said its allies now had "near complete control" of the town, a fresh round of peace talks opened between the Syrian opposition and regime in Geneva.

Al-Bab, just 25 kilometers (15 miles) south of the Turkish border, was the last IS stronghold in the northern Syrian province of Aleppo.

"We are announcing Al-Bab completely liberated, and we are now clearing mines from the residential neighborhoods," said Ahmad Othman, a rebel commander.

"After hours of fighting, we chased out the last remaining IS rank and file that were collapsing after the fierce shelling of their positions," he added.

"When the search and combing operations are over, we will be able to say that Al-Bab has been completely cleared of Daesh (IS) elements," he said, quoted by state-run Anadolu news agency.

Isik reaffirmed that Turkey was now ready to join any operation by international coalition forces to take the Syrian city of Raqa, the extremist group's de facto capital.

An AFP correspondent could hear intermittent gunfire on Thursday afternoon as rebel units continued to clear the heavily damaged town.

Most rebel fighters appeared relieved, with some dancing in the streets and others munching on a late breakfast after hours of clashes.

But others were on edge, nervously discussing three bombs that had detonated that morning in areas under their control.

Several corpses of alleged IS fighters lay crumpled under a destroyed building.

One rebel poached a weapon from a dead IS fighter.

The Syrian Observatory for Human Rights said IS fighters were still present in parts of the town and that rebels were in control of less than half of it.

Rebels launched an offensive to capture Al-Bab last year with the support of Turkish ground troops, artillery and air strikes.

Al-Bab was IS' last remaining stronghold in Aleppo province, after a U.S.-backed alliance of Kurdish and Arab fighters seized the town of Manbij in August.

The jihadist group still controls a scattering of villages and towns in the province.

Field commanders from two other rebel factions in the town also claimed the capture of Al-Bab to AFP, including Abu Jaafar, who said he expected clearing up operations would be wrapped up within hours.

"Dozens of IS fighters were killed and we evacuated more than 50 families from inside Al-Bab," he said.

Turkey sent troops into Syria in August last year in an operation it said targeted not only IS but also U.S.-backed Kurdish fighters whom it regards as terrorists.

The battle for Al-Bab has been the bloodiest of the campaign with at least 69 Turkish soldiers killed.

The town was also seen as a prize by Syrian President Bashar Assad's forces, who had advanced to just 1.5 kilometers (one mile) from Al-Bab in recent weeks.

"Al-Bab is important, insofar as its taking from IS will deprive the group of a tax base and an area where it was able to congregate and plot attacks against Syrians and the West," said Aaron Stein, a senior fellow at the U.S.-based Atlantic Council.

"For Turkey, the mission, as was defined back in 2016, is now complete: Turkish forces have forced IS from the border and cut the overland route between the two Kurdish cantons" in northern Syria, he told AFP.

Syria's Kurds have managed autonomous administrations in swathes of the country's north since 2012, and Al-Bab falls between the "cantons" of Kobane and Afrin.

"However, Turkey will now have to grapple with the questions of prolonged occupation of a foreign country and help to oversee the transition to civilian rule, a tall task for any foreign military," Stein added.

More than 310,000 people have been killed since Syria's conflict broke out in March 2011 with protests against Assad that spiraled into all-out war.

pathetic creature! you must know that it was not terrorist who killed your hussain, right? so cut down on the hatred and vendetta and focus on your board meetings.

The irony is that today ISIS reversed in a matter of hours what took the Assad Army and supporting militias 2 weeks to achieve http://syria.liveuamap.com/en/2017/23-february-reports-isis-launched-large-counterattack-west

It is confirmed that as of now Isis was forced to relinquish Albab, Qabasin and Bzaah. It is likely that ES will attack Tadef next and then stop. According to Isis , the attacking force lost 400/fighters in 3.5 months of fighting for Al Bab

when loonie @flametrooli can't win an argument, it calls the other person 'Salafi', which is an unconscious self-projection upon someone you cant outsmart nor beat with facts.

The only pathetic creature living here is Drew Barrymore still believing in E.T. and the martians.

I have the utmost respect for Mr. blablablablabla for detecting trolls and for not believing in E.T and the martians ever since he turned 60.

Mowaten Safawi ... Which shows that the sources I use have credibility. When they found that to be a false, they labelled it as such. On the other hand, your side sources are full of propaganda and useless info

LoonieFT ... You are a liar with no shame and honor

if i had a nickel for every time @flametroller says the word 'salafi' abusively, out of context and out of pure blind sectarian hatred.. I would be a billionaire by now.

btw @flametroller, you need to realize that repeating your own lines is not beneficial to your already deteriorating state of mind in any way..

the one who likes to be called janoubi posting from Haifa,

subhuman like you are not in condition to tell people how to act and what to do.

Unlike Nusralaat and his clique, I never lived underground and I have no reason to ...because I don't need to hide! Only criminals need to hide. Could you remind us who lives in ditches and tunnels ?Daesh ... and Hizbulaat

said the delusional guy.
They are not rebels but terrorists