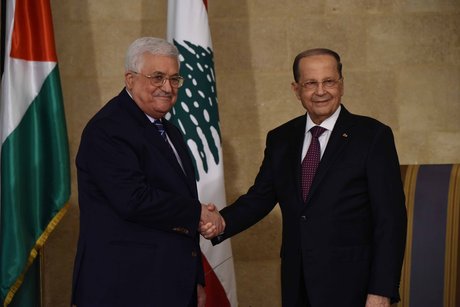 Palestinian President Mahmoud Abbas held talks Thursday with President Michel Aoun at the Baabda Palace at the beginning of a three-day visit to Lebanon.

After a bilateral meeting between the two leaders, the members of the Palestinian and Lebanese delegations joined the talks, state-run National News Agency said.

"We agreed to coordinate stances and cooperate in a manner that serves the interests of our two countries and the causes of justice and peace for which we have offered dear sacrifices," Aoun said at a joint press conference after the talks.

"I stressed the importance of President Abbas' role in preserving the stability of the (Palestinian refugee) camps so that they don't turn into hubs for those seeking to take advantage of the Palestinian people's plights," Aoun added, referring to extremist groups.

Abbas for his part voiced confidence that the talks with Aoun "will lead to strengthening the ties of brotherhood and cooperation between the two countries and the two brotherly peoples."

And stressing that Palestinian refugees in Lebanon are only "guests," the Palestinian leader vowed to exert all efforts possible to achieve "their certain return to their homeland Palestine."

Abbas also said the Palestinian factions are committed to preserving security in refugee camps around Lebanon and that they stand against terrorism in all its forms.

By long-standing convention, the Lebanese army does not enter the twelve Palestinian refugee camps in Lebanon, leaving the Palestinian factions themselves to handle security.

That has created lawless areas in many camps.

More than 450,000 Palestinians are registered in Lebanon with the U.N. agency for Palestinian refugees UNRWA. Most live in squalid conditions in 12 official refugee camps and face a variety of legal restrictions, including on their employment.