After Prison Ordeal, Russian Dissident Vows to Battle On 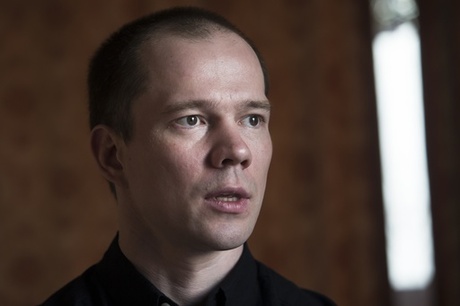 It was a few minutes after the prison guards hung him up by his shackled wrists, blindfolded, that Ildar Dadin says he began to crack.

The anti-Kremlin activist had already put up with solitary confinement, repeated beatings, and having his head shoved down a toilet by officers at a remote prison in northwest Russia.

Then something in him just snapped.

"I felt this incredible pain and thought that someone might be coming to rape me," Dadin told AFP recalling his 15 months behind bars.

"I remember I sensed myself starting to break."

Dadin, 34, is the first and only person in Russia to have served time for contravening a tough law clamping down on protests in the country.

In December 2015 he was jailed for the supposed crime of holding repeated peaceful demonstrations against President Vladimir Putin's rule without official permission.

Dadin's case became a cause celebre for those opposed to Russia's strongman leader.

Eventually he managed to get word out about his treatment in jail and the allegations he made of torture exploded into the public eye, shining a spotlight on abuse that forced even the Kremlin to pay attention.

Late last month in a surprise ruling the Russian supreme court quashed his sentence and ordered him freed.

For several days now Dadin has been back at his small flat in a nondescript Moscow neighborhood trying to adjust to a new life with his wife Anastasia, whom he married while in prison.

Despite his ordeal in prison and attempts to break him there, the former security guard with closely-cropped hair insisted that he has no intention of giving up his struggle against the Kremlin.

"While I was in prison other inmates asked me if I was going to continue, and I always replied firmly: yes," he said.

"Otherwise it would mean that I had started and then got scared."

During his sentence Dadin was shifted between several prisons, but he says the worst came when he was sent to penal colony number seven in the Karelia region on the border with Finland.

There he says he was placed in a punishment cell for no reason and denied basic rights.

When he tried to file a complaint and announced a hunger strike in protest he says he was threatened and then tortured until he recanted.

Dadin -- called a prisoner of conscience by Amnesty International -- said at first he thought he was being targeted due to his political stance but then the sounds of others being beaten convinced him abuse was routine.

Eventually he managed to smuggle out an account of the abuse via his lawyer and when it was published last November by independent Russian media it caused a major scandal.

Russia's prison authorities denied the allegations but the Kremlin said Putin would be informed and in January he ordered a review of the penitentiary service's work, although it was not explicitly linked to the case.

Dadin says the furore over his abuse meant it became "inconvenient" for the Kremlin to keep on holding him and so he was eventually released with some six months left to serve.

He doubts that anyone will be held accountable for the abuse he suffered but insists he will remain in Russia and keep on protesting against abuses.

"I don't have a moral right to leave the country if other people are still being tortured," he said.

For the marginalized opposition in Russia Dadin's case was yet another blow.

The statute he was prosecuted under was introduced in 2014 as the Kremlin sought to close off avenues for protest following mass anti-Putin rallies and demonstrations that led to the ouster of Ukraine's Kremlin-backed leader.

"First of all, it was a warning to others so that they wouldn't take to the streets," Dadin said.

He said authorities held him up as an example. "Look what happened to him and look what will happen to you if you defend your constitutional rights just like him and go to peaceful protests."

His release came after an earlier ruling from the constitutional court that said the draconian law should not be applied to peaceful protesters.

But despite hope from rights activists that the legislation will no longer be applied it remains on the books and Dadin has no doubt the authorities will use it again if pushed.

"The Kremlin spat in my face," he said.