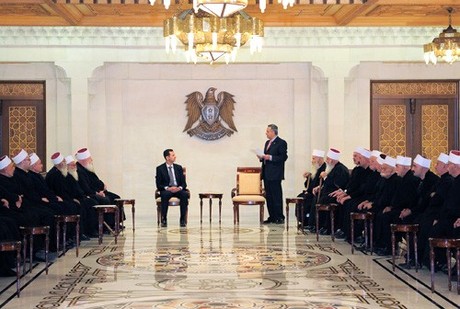 Addressing the Lebanese delegation, Assad said that “Syria is strong thanks to its people and the support of the brotherly and friendly people,” according to Syria’s state news agency SANA, stressing that “Syria is capable of overcoming the current events and that it won't ever give up its stances, principles and sovereignty whatever the pressures may be.”

Assad expressed appreciation for the “delegation's national stance which stemmed from their keenness on cooperation and fraternal relations between Syria and Lebanon, and their rejection of any foreign interference in the internal affairs of the two countries,” SANA said.

“Arslan said that the war against Syria is a practical manifestation of the sustainable war targeting the Arab nation, adding that the main goal is to destroy Syria, the fortress of the Arab Nation, as it never gives up the Arab rights,” SANA added.

Arslan told the Syrian president that “imperialist countries should make structural reforms to their systems” before trying to preach others, as quoted by the Syrian news agency.

For their part, the delegation members expressed their support for Syria's people and leadership to “overcome the conspiracy aimed at fragmenting Syria and the whole region,” SANA added.

Assad has all the time in the world to meet all sorts of people.. from daraki to mukhtar lol

Yesterday ASSad didn't know anything about anything. He didn't even know there was a problem. Today he is sure everything will be fine. The Druze are there to take a piece of Syria on the Golan when it falls.

tsk tsk tsk yousef, you need loads of meditating to do, open up you dinosaur ! we are in 2012 almost and which era are you living in 1435?
as to Assad, will not fall he said maheik? I have one answer for you Mr Assad: LOL & 100 LOL you other dinosaur !