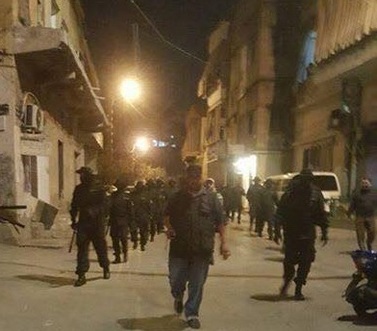 Former Justice Minister Ashraf Rifi slammed “Hizbullah's armed manifestation” in the southern suburbs of Beirut on Friday, saying it confirms the “state's resignation in favor of statelets,” his media office said in a statement on Saturday

“Although Lebanon's security forces are capable of uprooting drug dealers and contraband promoters, we instead saw yesterday a manifestation that confirms the State's resignation in favor of statelets,” said Rifi in his statement.

“Hizbullah has staged an armed appearance in Dahiyeh, showing the contradiction that this party expresses with the State and its institutions,” it added.

Addressing President Michel Aoun, Rifi asked referring to the President’s statement that defended Hizbullah's arms and asked: “What you stated earlier about the army's incapability to defend Lebanon, does it apply now to the security forces as well? Are they incapable too of protecting the social security of the Lebanese?”

“I pose the same question on the entire government specifically the Ministers of Defense and Interior. The Lebanese are waiting for clear answers from their officials on what happened. We will follow up on the issue until the end,” stated Rifi.

Pictures of masked Hizbullah members in black-clad went viral on social media on Friday, as reports said they spread out in Bourj al-Barajneh refugee camp in the evening in a campaign against drug dealers and gangs.

it must be the complimentary plan to Nuhad Al Mashnouq's 20th security plan for dahieh;)

the way you present arguments leave them dizzy and bewildered.

Bless you Aoun, Bless you Hariri and all the ruling corrupt class.

They are uprooting the rivals

your point? you boast that iran still has jews living there so your remark applies to them too , no? LOL

Those jews are visiting Bahrain from Israel, they are not natives of Bahrain saudi peace.

If they are Israeli leaders, then why so they carry Palestinian Flag badges on their chest?

Some Jews are actually anti Israel you see.

'Those jews are visiting Bahrain from Israel, they are not natives of Bahrain saudi peace."

oh? really? it says in the article that you have not read it seems = "The Muslim monarchy of King Hamad bin Isa Al Khalifa held a candle lighting ceremony on Saturday night attended by the local Jewish community"

"local community", not visiting bahrain...you did not read that? poor miss tic always caught in his propaganda....

mystic was born with lies in his mouth; a lousy propagandist.

I don't usually comment much but That Mystic was A Fail.

You're an Idiot Mystic!

the article is about an iranian terrorist murdering militia parading its criminals right under the nose of the Lebanese state and its security agencies and the devil worshiper from iran quotes an article about jews meeting in Bahrain !

Cry with Rifi guys, that's all you people are good for.

but when asked why the terrorist iranian party does not arrest the criminals and drug dealers in the Bekaa, @mowateh answered :

"_mowaten_:
It's not their job. The resistance is not the police"

Where are the drones when we néed them the most?

Ashraf Rifi God Bless you
Down with the iranian hezbollah

Rifi is ISIS, and we are all well aware of that.

we are all aware that all against hezbis are isis or zionists for you... so who cares what you bark?

looool @ 'we" as in heretics

Heretics are ISIS, and you people support ISIS. You both follow the same wahabism sect.

So it make sense, you are the ones barking about weapons, but in reality we all know without the Resistance weapons, you would've opened Lebanon up for ISIS and Israel.

So what else are You? Of course you are one of the things, just be honest.

once again you just prove my point, your binary mind just bugged again....

the article is about hizballah in dahieh not raqqa ya troll:))))

SO? your point? what do i have to do with arabdemocrat? your brain bugs too it seems...

Dishonest muffinbrain, I dare you to show the link so people can see the context. And no I do not support ISIS and think that they are a despicable organization. And yes, under ISIS Raqqa was one of the safest cities because ISIS and the regime had a deal

Rifi is a secterian troublemaker.

anybody who criticizes your iranian militia is a sectarian trouble maker

and that makes him sectarian ya heretic???

peace007 Yesterday
That type of language gets us nowhere. Time to work together for the sake of the ordinary citizen.

And there you have it, picture of a filthy murdering militia. They know it, and therefore hide their face.