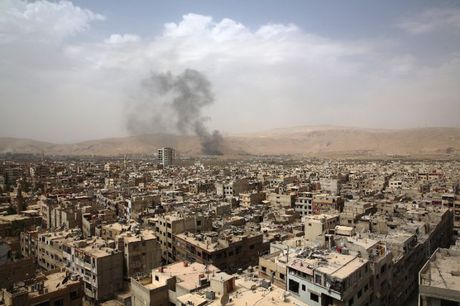 Syrian rebels on Friday welcomed a US strike on a government airbase, but urged additional action, with one powerful faction saying a single strike was "not enough."

The US attack on the Shayrat base in central Syria was Washington's first military action against the regime in the six-year civil war.

"Hitting one airbase is not enough, there are 26 airbases that target civilians," a key figure in the Army of Islam faction, Mohamed Alloush, said on his Twitter account.

"The whole world should save the Syrian people from the clutches of the killer Bashar (al-Assad) and his aides."

Other rebel groups welcomed the US strike and called for continued military action against the regime.

"The American strike against the killing tools used by Bashar al-Assad is the first step on the correct path to combating terrorism and we hope it will continue," said Issam Raes, spokesman for the Southern Front rebel faction.

"In my opinion, the message is political, and the message has arrived to Russia and been understood," he told AFP.

Colonel Ahmed Osman, of the Turkey-backed Sultan Murad rebel group said: "We welcome any action that will put an end to the regime that is committing the worst crimes in history."

Mohamed Bayrakdar, another leader of the Army of Islam, which operates mainly around the capital Damascus, described the strike as "a bold and correct step."

"We welcome any response to the crimes of the regime," he told AFP.

how many times have you said it? Does it make your assad innocent? No, so quit while you're ahead. You are sounding more and more stupid with every passing minute.

As many times as it takes until someone has a convincing answer. Those who benefited are those who are now cheering.

If Bashar was "testing Trump", Syria wouldn't deny they did it.

the ones benefitting the most until now are daeshits. the airbase that was attacked is the one serving the palmyra/deir ezzor front, right when the syrian army was gaining the upper hand and on the verge of breaking the deir ezzor siege.

this attack reminds the one in september when US bombers hit an SAA position in deir ezzor killing and injuring over 200 syrian soldiers and opening the way for a coordinated attack by daesh.

seems like the US interventions are aimed at preventing an SAA victory over daesh. either because they want to maintain the wedge between syrian and iraqi forces, or because they need their kurdish proxies to take over these areas.

and btw, it's priceless to watch these subhuman lapdogs cheering the US and making cheesy statements, when we know what they're really about

note that this are pro-rebel sources in a pro-rebel media, so nobody can say this is SAA propaganda.

lol @mowateh
sometimes i wonder if euthanasia wouldnt be the most merciful outcome for creatures of your kind.

now you believe the Syrian Observatory for Human Rights a zionist organization run by a pimpled face loser from his basement apartment in the UK?

the islamists fanatics, daesh and co, are responsible for massacres and killing of civilians and should be treated accordingly but your problem moooowaten (and your friends here) is that you take that as an excuse to avoid mentioning the syrian regime's massacres they also did and that have nothing to envy daesh... you also see the syrian opposition as all islamists (even though they participate in the negotiations on the invitation of the russians! the very same rhetoric as the syrian regime)
so the day you will also acknowledge that the one you are proudly supporting does the very same thing that you are prompt to see in the other camp, you will not be credible: till then you are just a syrian regime spokesman...

both sides are war criminals....

it still is, but that doesnt prevent me from using their words against themselves.

the people who put civilians in cage to use them as human shields are not daesh [eace, they're the army of islam which is considered as "moderates" by the US and other revolutionaries and idealists around the world.

and yes, 99% of the so-called opposition is made up of islamists, it's not due to how I "choose to look at it", it's a simple and undeniable fact from the start. the distinctions being made between current al qaeda (nusra) and former al qaeda (ISIS) is a waste of time and a smokescreen to divert us from the real issues at hand. it's a global war against syria that is going on, and of course syria has to defend itself. it's not like they ever had the choice between peace and war, they only had to chose between surrendering or fighting.

how about you ta troll with 100 aliases, are you not an islamist fundamentalist sectarian soldier in wilayat al faqih?

you never ask the same question when you accuse saudi arabia of funding isis whom you accuse of wahhabism? why would saudi arabia fund and arm isis if isis makes saudi arabia look bad? but you are too absorbed in your sectarian hateful lack of logic that you cannot see further than your ugly nose.

who benefits from isis acts other than shia iran?

LOOOOL, I accuse SISIS of Wahhabism?

Is there any DOUBT that they are Wahhabists?

and did you answer his question or are you regularly that stupid?

It isn't about benefits, its Bachar testing Trump. It cost him half of his air force. It'll benefit uncle Vlad who'll sell him new aircrafts dimwit.

The Wahhabists have a lot to gain from this. Assad has nothing.

Assad can benefit from a lesson learned; Dont push it too far...

The rebels have learned that "chemical attacks" triggers bombing of government forces. Remember this next time.

and that's exactly why they have been doing it 10 times a month;)

the terrorists feedback toward their creator, they complement each other.