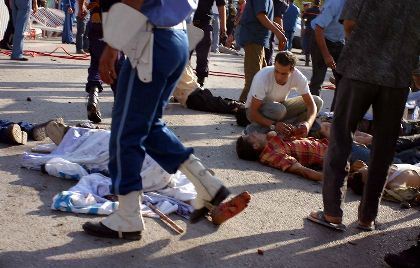 A group identifying itself as an offshoot of al-Qaida in the Islamic Magreb (AQIM) said Saturday it was holding three Westerners kidnapped from a refugee camp in Algeria in October.

"This is the Jamat Tawhid Wal Jihad Fi Garbi Afriqqiya in west Africa. We claim the operation carried out on October 23 at Tindouf when two Spaniards and an Italian were kidnapped," said the audio and written message sent to Agence France Presse's correspondent in Bamako.

The transcript was read by telephone by a man claiming to be a spokesman for the group. He said they had broken away from AQIM but did not say why.

Security sources in the region had recently spoken of the formation of the group, which means "Unity Movement for Jihad in West Africa."

Saturday's claim came the day after the Mauritanian news agency ANI carried pictures of five Westerners whose abduction in Mali last month in two separate incidents was claimed by AQIM.

One photo showed French nationals Serge Lazarevic and Philippe Verdon with three armed men behind them, their faces obscured by turbans.

The other showed a Dutch national, a Swede and a man with dual British-South African nationality surrounded by four armed men, their faces similarly masked.

On Thursday, AQIM had sent a statement to ANI and AFP's Rabat office claiming the kidnappings but denying it carried out the October abductions of the three European aid workers from a refugee camp in Tindouf in western Algeria.

"What this emphasizes is that elements of this group are from AQIM," one security source told AFP.

"They have decided to spread the jihad in West Africa and to not confine themselves just to the Maghreb or Sahel," the source added.

"In the cell there are Sahrawi elements who took part in the kidnap of the three Europeans from the camp in Tindouf. There are some Algerians, but also some people from different west African nations," said the source.

The kidnapping of tourists in the region, which began in 2003 when 32 German and Swiss travellers were seized in southern Algeria, has become big business for local people looking to sell a foreigner to AQIM for a quick windfall.

AQIM grew out of a movement launched in the late 1990s by radical Algerian Islamists who sought the overthrow of the Algerian government to be replaced with Islamic rule. The organization linked to al-Qaida in 2006.

These militant Islamists have spun a tight network across tribes, clans, family and business lines that stretch across the Sahel.

Defense ministers from six North African countries were due to meet on Sunday in the Mauritanian capital Nouakchott to discuss the fight against AQIM in the region.

Also on the agenda is the return of thousands of heavily armed fighters who served fallen Libyan leader Moammar Gadhafi.