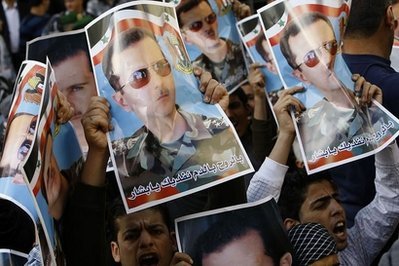 The Syrian embassy in Amman said on Sunday that a group of people broke into the mission and attacked the staff after claiming they had paperwork to complete.

"More than 10 people broke into the embassy today and when the security guard tried to kick them out, they beat him with tools they carried," the embassy said in a statement.

"Wearing coats and tops on which the flag of French occupation (of Syria) is printed, they also attacked and beat deputy ambassador Mohammed Abu Sirrieh, consul Tamam Ghanem and other diplomats and employees."

The embassy, where dozens of protests have been held to condemn a government crackdown on dissent in Syria, said "one of the attackers, Ahmed bin Mustafa Shreiqi, has been held inside the mission. He will be handed over to Jordanian authorities."

The statement added that eight of the attackers who entered the embassy have been arrested by Jordanian police.

"This is an aggression on the embassy and on Syria. It violates Jordanian laws as well as diplomatic treaties between Damascus and Amman," it said.

More than 4,000 people have been killed in Syria's unrest, according to the United Nations.