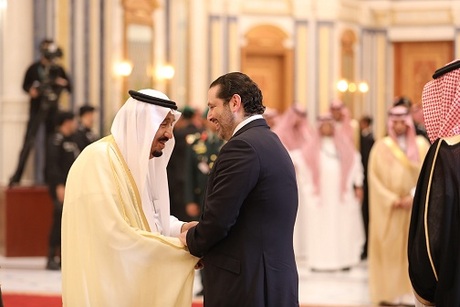 The talks were held on the sidelines of a landmark Arab-Islamic summit with U.S. President Donald Trump.

MTV had reported that Hariri held a brief chat with Saudi Arabia's powerful Deputy Crown Prince Mohammed bin Salman after he was welcomed to the summit by King Salman bin Abdul Aziz.

A close aide to Hariri had said that the prime minister's stances at summit “will not breach Lebanese consensus.”

“The participation was discussed in Cabinet and was coordinated between President Michel Aoun, PM Hariri and Hizbullah's ministers in the government, and PM Hariri will not have stances that breach Lebanese consensus and there will be no dramatic and unusual decisions,” Culture Minister Ghattas Khoury told al-Mustaqbal newspaper in remarks published Sunday.

“The issue of Hizbullah's arms will not be tackled by the summit and I don't think there will be anything new regarding the Lebanese situation,” Khoury added.

Describing the Syrian refugee crisis as a “dramatic repercussion,” the minister said “Lebanon is concerned with asking the Arab, Islamic and international communities to close ranks to resolve the Syrian crisis peacefully to pave the way for the refugees' return and for the start of the project of rebuilding Syria.”

“Most participating countries have already labeled Hizbullah as a terrorist organization and they are not awaiting Lebanon's stance in this regard and there will be nothing new on this,” Khoury went on to say.

He also noted that Lebanon would not voice reservations over the summit's resolutions or over the issue of combating terrorism “unless there will be resolutions pertaining to a domestic Lebanese issue.”

“I however doubt that that will happen,” Khoury added.

“President Aoun took part in the Jordan summit and the official rhetoric expressed the consensus of the Lebanese, and PM Hariri is heading to the summit with the same rhetoric on which the Lebanese have agreed,” the minister went on to say.

Hariri shaking hand with the global terrorism sponsors, the Wahhabi state stooge and with the cowboy, ISIS founder...

When Iranian officials like Iranian Foreign minister jawad Zarif shook the hands of John Kerry more than 50 times, why did you not say "Zarif shaking hand with the cowboy, ISIS founder..."?

I am sensing a lot of inconsistencies in your stances lately Southern....

When Iranian officials like Iranian Foreign minister jawad Zarif shook the hands of John Kerry more than 50 times, why did you not say "Zarif shaking hand with the cowboy, ISIS founder..."?

I am sensing a lot of inconsistencies in your stances lately Southern....

Apart from the iranian shias, everybody considers hezbollah a criminal iranian terrorist organization.

Next time you visit the late Rafik Hariri's grave, make sure you mention to him the 'Consensus'.