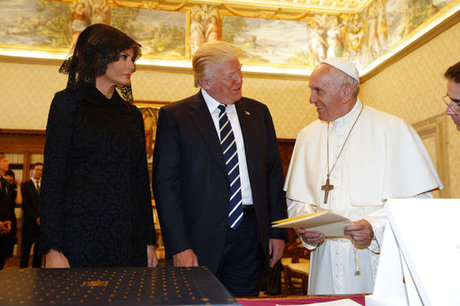 It could have caused a diplomatic incident but a culinary quip from Pope Francis seemed to have gone down well with Donald Trump and his wife Melania.

In one of the lighter moments of his meeting with the U.S. president at the Vatican on Wednesday, Francis made an apparent allusion to Trump's imposing physical size.

"What do you feed him on? Potica?" Francis asked Melania, in a reference to a calorie-laden cake that comes from her native Slovenia and is pronounced "potteezza".

Reporters in the room thought initially that the First Lady had replied "Pizza!" But her staff confirmed later to AFP that she had appreciated Francis had produced a custom-made joke for her benefit.

Trump, famed for his love of fast food and his use of "fat" as an insult for his enemies, took the quip in good part, beaming broadly, as he did throughout the public parts of an encounter that lasted barely 30 minutes.

Both sides had been determined that the meeting would emphasize areas of agreement between the new administration and the Vatican, after some pointed exchanges between the two leaders over the last year.

These have included Francis calling Trump's border wall plans "not Christian" and the billionaire tycoon suggesting the pope might be glad to have him in charge if the Islamic State group attacked the Vatican.

Against that backdrop, Francis' diplomatic advisers would no doubt have counseled the outspoken pontiff against any reference to Trump's size, which came under considerable scrutiny during the U.S. election campaign.

According to an interview he gave last year, Trump is 1.88 meters tall (six foot two inches) and weighs 107 kilos (235 pounds).

That makes him overweight but not obese in the most common measurement used by doctors -- but many observers are skeptical, believing his true weight does take him into obese territory.