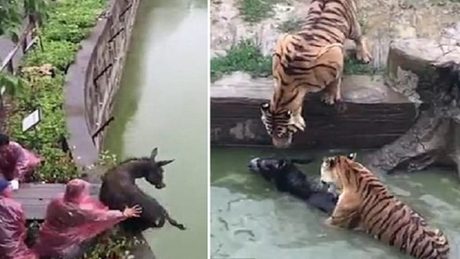 Visitors to a Chinese zoo got ringside seats to a shocking live feeding after a group of investors tossed a live donkey into a tiger pit.

Apparent videos of the incident, which took place Monday at a wild animal park in the eastern province of Jiangsu, provoked an outraged response on social media, with many questioning how the men could engage in such an inhumane act.

In response, the zoo issued a statement on its official Weibo social media account Monday, saying that the incident resulted from a court case with another company, which had enraged investors.

The dispute, which has gone on for two years, has made it difficult for the company to carry on its regular business, the statement said.

The investors, it added, have not seen any profit in two years, making them very "dissatisfied."

So dissatisfied that they snatched a "donkey and a sheep" to feed to the tigers.

The authenticity of the video, which has gone viral online, could not be independently verified.

The footage circulating online shows men wearing plastic rain ponchos and pushing the donkey off the back of a truck and into a moat.

A tiger jumps in the water, hops on the donkey's back and sinks its teeth into the prey's neck.

A second tiger joins the fray, taking swipes at the donkey with its paw from the edge of the water before diving in. The prey brays as onlookers gasp in horror.

"We're not allowed to sell it, and we cannot continue raising it," one investor told Hongxing News, adding "we might as well feed it to the tigers."

In its statement, the safari park pleaded for the court to "settle the dispute as soon as possible," ominously noting that "otherwise, investors will resolve it through other means or channels."